International aviation standards are changing to allow aircraft flying above an ocean to fly closer to each other. Air traffic controllers can apply the new standards in the airspace they manage if they use certain flight surveillance technologies. If not, aircraft must continue to fly farther apart—using less direct routes that aren’t as fuel efficient.

The FAA evaluated two such surveillance technologies and committed to using one of the technologies by 2022. It will continue to study the other.

Most of the commercial airlines we interviewed agreed with FAA’s approach.

An airplane flies above the north Atlantic Ocean 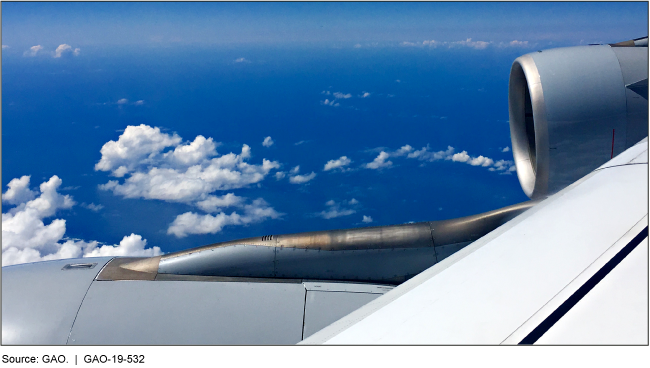 Photo overlooking the wing of an airplane flying over an ocean

The Federal Aviation Administration (FAA) evaluated two aircraft surveillance technologies that would allow aircraft to safely fly in closer proximity while in oceanic airspace. Based on its evaluation, FAA committed to using one in the near term and to continue to study another for future use. Specifically, in April 2019, FAA committed to implement by 2022 new international standards that allow reduced distances between aircraft, called minimum separation standards. These reduced distances would be enabled by a surveillance technology known as enhanced Automatic Dependent Surveillance-Contract (ADS-C). FAA also decided to continue studying the use of another enhanced surveillance technology known as space-based Automatic Dependent Surveillance-Broadcast (ADS-B)—to further improve surveillance in U.S. airspace. Both technologies offer increased frequency in reporting of an aircraft's location, which enhances safety, and can support new minimum separation standards. FAA decided to proceed with enhanced ADS-C in the near term because the efficiency benefits to airspace users exceeded the costs of more frequent location reporting and air traffic control system upgrades by 2 to 1. In contrast, FAA determined that the costs of using space-based ADS-B in U.S. oceanic airspace outweigh the efficiency benefits by 6 to 1. FAA officials added that operational challenges to using space-based ADS-B to manage air traffic in U.S. oceanic airspace have not yet been resolved. FAA plans to continue studying potential uses for space-based ADS-B in U.S. airspace to determine if benefits can outweigh the costs (see figure).

GAO found that most selected airlines (11 of 14) support FAA's overall approach to enhance oceanic surveillance. Selected airlines also said they expect the new minimum separation standards to improve access to more direct and fuel-efficient routes. FAA is taking steps to provide these benefits by restructuring routes in one area of U.S. oceanic airspace and by applying new minimum standards to give aircraft better access to fuel-efficient altitudes. According to FAA officials, however, additional benefits, such as redesigning other U.S. oceanic airspace, expected by selected airlines are limited by (1) relatively low rates of aircraft equipage with the technology that enables reduced separation and (2) the frequency of disruptive weather patterns in parts of U.S. oceanic airspace.

Recent developments in surveillance technologies, which provide an aircraft's location to air traffic controllers, have the potential to improve air traffic operations over the oceans. FAA has explored how to improve surveillance capabilities in U.S. oceanic airspace to take advantage of new international separation standards that could lead to the more efficient use of this airspace.

GAO reviewed documents related to FAA's planned investment in enhanced oceanic surveillance and interviewed FAA officials working on this effort. Interviews included those with the Air Traffic Organization and air traffic controllers who manage U.S. oceanic airspace. GAO surveyed representatives of 14 commercial airlines, including 11 U.S. and foreign passenger airlines, which were selected based on factors such as flight volume; and 3 U.S. cargo airlines, which were selected based on tons of cargo shipped. GAO also interviewed other aviation stakeholders, including trade associations, unions representing pilots, and foreign air navigation service providers that manage airspace adjacent to U.S. oceanic airspace.