In 2017, a series of high profile and destructive disasters—Hurricanes Harvey, Irma, and Maria, and wildfires in California—affected nearly 47 million people (about 15% of the U.S. population). As of June 30, 2018, the Federal Emergency Management Agency had entered into contracts worth almost $4.5 billion in response to these disasters.

We testified about key challenges FEMA faced in contracting for goods and services for these disasters. For example, it needed to provide better guidance on how to use advance contracts—which are established prior to disasters to quickly provide life-sustaining goods and services in their immediate aftermath.

Debris removal was a key contracting activity FEMA coordinated after the 2017 disasters. 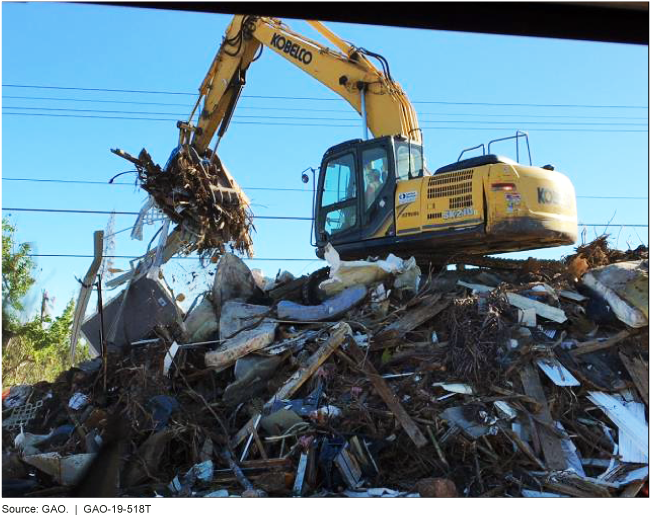 An excavator truck removes debris after a hurricane struck in Monroe County, FL.

Following Hurricanes Harvey, Irma, and Maria, and the 2017 California wildfires, federal agencies entered into disaster-related contracts worth about $9.5 billion, according to data as of June 30, 2018—the latest and most complete data at the time of GAO's review (see figure). The Federal Emergency Management Agency (FEMA) obligated about $2.9 billion of this total through advance contracts, which it establishes prior to a disaster to rapidly mobilize resources. FEMA obligated an additional $1.6 billion through post-disaster contracts, which are established after disasters hit.

In its December 2018 and April 2019 reports, GAO made 10 recommendations to strengthen FEMA's ability to address challenges GAO identified in how FEMA plans, coordinates, and tracks its contracts:

Planning: FEMA has an outdated strategy and unclear guidance on how contracting officers should use advance contracts and has not fully assessed its contracting workforce needs. Effectively planning its contract use is critical to FEMA quickly providing critical goods and services.

Coordination: FEMA did not fully coordinate with states and localities on certain contracts and encountered communication and coordination challenges with other federal agencies. Effective coordination helps FEMA ensure stakeholders have the tools needed to facilitate their disaster response efforts.

Tracking: The full extent of 2017 disaster contracting activities, for FEMA and other agencies, is unknown. GAO found that codes used to track obligations for these disasters in a federal procurement data system were closed without full consideration of user needs or due to inconsistent implementation of criteria established by the Department of Homeland Security (DHS) and other agencies, limiting visibility over federal disaster contracts.

According to FEMA—a component within DHS—the 2017 disasters affected 47 million people, or about 15 percent of the nation's population. Federal contracts have played a key role in responding to these disasters and in long-term community recovery. So far, FEMA has obligated billions of dollars on these contracts.

To conduct this work, GAO analyzed data from the Federal Procurement Data System-Next Generation through June 30, 2018, the latest and most complete data available for the 2017 disasters. GAO also analyzed FEMA guidance and documentation and interviewed FEMA officials to discuss the use of contracts to respond to the 2017 disasters.

GAO has made a total of 19 recommendations—most of which were to FEMA—related to contracting activities in response to the 2017 disasters. Ten of these are described in this statement. DHS concurred with most of these recommendations, and has some actions underway, but it has not fully implemented them. Attention to these recommendations can assist FEMA as it uses contracts to respond to future disasters.