DOD employs about 80,000 civilians at maintenance depots to keep helicopters, ships, and other weapon systems working. This workforce is aging and DOD faces challenges in hiring and retaining workers with key skills. Officials cited examples of maintenance taking months or years longer than expected, in part due to shortages in skilled personnel.

Some of the services' plans for dealing with depot workforce needs are outdated or are not in use. The services have also not evaluated training programs and other steps depots have taken to maintain key skills.

We recommended the services assess the effectiveness of their depot workforce programs. 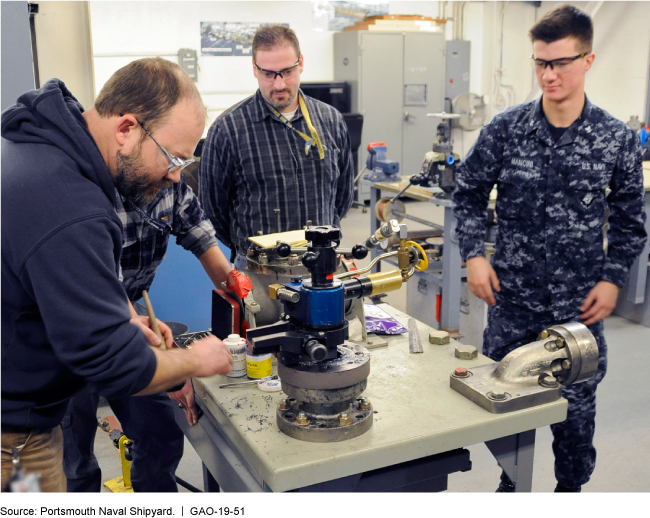 Reissued with Revisions Dec 26, 2018
This report was revised on December 26, 2018 to adjust the formatting of Appendix I on pages 31 to 47.
Skip to Highlights

The Department of Defense's 17 facilities that perform major depot-level maintenance on weapon systems, such as repairing tank engines or overhauling navy submarines, are generally able to fill occupations requiring personnel to possess certain critical skills (“skilled occupations”), such as machinery mechanic and sheet metal specialist. GAO's analysis of depot personnel data showed that most of the military services were generally able to fill skilled occupations to at least 80 percent of their authorization during fiscal years 2013 through 2017. According to Marine Corps officials, contractors are used to meet maintenance and repair workload requirements even when authorizations for skilled civilian workforce are not fully met.

However, the depots identified a variety of workforce challenges, such as hiring personnel in a timely manner and providing inexperienced personnel with the training necessary to become proficient in skilled occupations. According to DOD officials, these challenges contributed to delays in the maintenance of some weapon systems. DOD officials also identified weapon systems for which maintenance was delayed by shortages in skilled personnel. For example, at Pearl Harbor Naval Shipyard, two submarines were delayed approximately 23 and 20 months past their scheduled maintenance dates in part as a result of shortages in ship fitters and welders, among others. At Ogden Air Logistics Complex, shortages in avionics technicians delayed the maintenance of the F-16 aircraft, and shortages in low observable coater specialists delayed the maintenance of the F-22 aircraft.

Since 2008, all four military services have developed strategic plans that identify and address workforce challenges at the depots. However, some of these strategies are either outdated or have not been implemented. The service components told GAO that they plan to revise, update, and utilize them by the end of fiscal year 2019 at the latest. In the interim, the depots maintain their own planning processes and have taken a variety of actions to help maintain critical skills in their workforces, such as offering recruiting and hiring incentives to skilled workers, implementing training and apprenticeship programs and partnering with local vocational schools.

While the services have collected some data regarding these actions, the depots and the services do not know how effective they have been, because they have not assessed the results of these actions in helping the depots to hire, train, and retain skilled personnel—including determining whether the actions are cost effective. By assessing the cost and effectiveness of these actions, the services would be better able to identify the hiring, training, and retention actions that work, and identify those that are ineffective or cost prohibitive. This would allow them to better tailor their actions to ensure that the depots hire, train, and retain personnel for skilled occupations, and help ensure they are positioned to provide effective depot maintenance for DOD's weapon systems.

DOD employs over 80,000 civilian personnel at its 17 major maintenance depots to maintain weapon systems such as aircraft, combat vehicles, and ships. The depot workforce has unique skills, and the depots must compete with the private sector for qualified personnel. Increasing numbers of depot workers have been retiring, and the number eligible to retire is expected to increase. Because it takes 5 years or more to become proficient in some occupations, DOD must systematically plan and prepare to hire, train and retain the workforce it needs to support its vital maintenance and repair mission.

GAO was asked to review DOD's efforts to maintain critical skills at its maintenance depots. GAO examined (1) DOD's challenges in filling skilled occupations and maintaining critical skills in the depot workforce, and any potential effects of these challenges on maintenance activities and (2) actions DOD has taken to hire, train, and retain personnel with critical skills, including its efforts to determine the effectiveness of those actions. GAO analyzed personnel data from fiscal years 2013 through 2017, reviewed depot strategic plans, and met with depot officials responsible for developing initiatives to recruit and train depot personnel.

This report was revised on December 26, 2018 to adjust the formatting of Appendix I on pages 31 to 47.
Skip to Recommendations

GAO recommends that the Army, Navy, Marine Corps, and Air Force assess the effectiveness of the actions they have taken to maintain critical skills in the depot workforce. The Department of Defense concurred with GAO's recommendations.