The Army, Navy, and Air Force have implemented common standards for how they determine necessary staffing levels at their health clinics for a number of medical specialties—but haven’t done so for their dental clinics. As a result, DOD dental clinics may not be staffed as efficiently as possible to provide dental care across the military services.

The military services have also struggled to recruit and retain certain types of dental specialists, such as oral surgeons. We recommended that the services develop a common set of dental staffing standards and a process to evaluate recruitment and retention efforts. 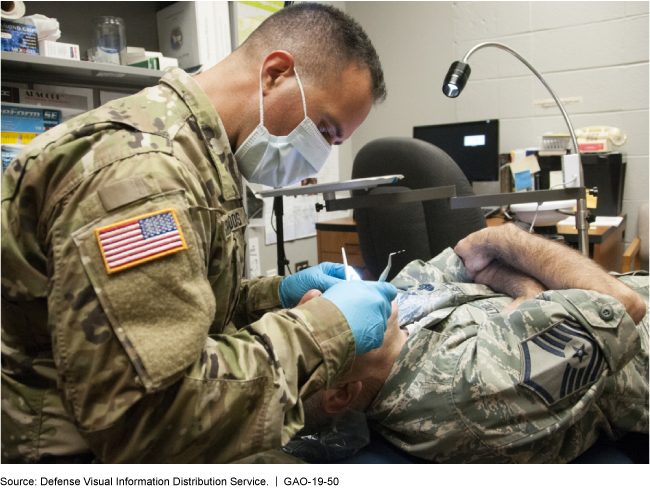 Photo of servicemember receiving dental care from a military dentist.

The Army, the Navy, and the Air Force meet their needs for military dentists by recruiting both dental students and fully qualified dentists. The services generally met their recruitment goals for dental students between fiscal years 2012 and 2016, but faced challenges recruiting and retaining fully qualified dentists during that period. For example, the Army missed its recruitment goals for fully qualified dentists in all 5 years, the Navy missed its goals in 2 out of 5 years, and the Air Force missed its goals in 3 out of 5 years. These challenges are most pronounced for certain specialties. For example, service data indicate that the Army and the Navy were unable to recruit any oral surgeons, while the Air Force recruited 50 percent of the oral surgeons it needed. Service officials cited various reasons for not meeting recruitment goals, including the availability of more lucrative careers in the private sector and quality of life concerns associated with military service.

The services rely on various programs, including scholarships and special pay and incentives, to attract and retain military dentists, and service officials stated that they monitor their programs by reviewing their goals, among other actions. However, GAO found that some services continue to provide incentive bonuses for positions that are overstaffed and have met or exceeded recruitment goals, but they do not know whether this is necessary because they have not evaluated the effectiveness of their programs. Without evaluating their programs, the services lack the information necessary to ensure that they are using recruitment and retention incentives effectively and efficiently for attracting and retaining dentists.

DOD has taken steps to modernize its Military Health System to ensure that it operates efficiently. For example, in September 2013, the Defense Health Agency was created, in part, to implement common clinical and business processes across the services. Essential to this effort are the services' ability to effectively staff their medical facilities, including the processes used for staffing dental clinics and the services' ability to recruit and retain military dentists.

Senate Report 115-125 included a provision for GAO to review the services' processes for determining requirements for dentists and its programs for recruiting and retaining military dentists, among other things. GAO assessed the extent to which the services (1) use validated dental clinic staffing models that also incorporate cross-service staffing standards, and (2) have recruited and retained military dentists and measured the effectiveness of their recruitment and retention programs. GAO assessed service dental clinic models, analyzed recruitment and retention data from fiscal year 2012 through 2016, and interviewed DOD and service officials.

GAO recommends that each of the services develop cross-service staffing standards to be incorporated into their staffing models, and evaluate the effectiveness of their recruitment and retention programs. DOD did not provide comments on a draft of this report.