The Navy will start taking certain submarines out of service in 2027 and is relying on its new Columbia class submarines to replace them. The schedule for construction and delivery of the first submarine is aggressive and leaves little room for error.

However, the Navy's cost estimate to construct 12 Columbia class submarines—$115 billion—is not realistic because it is based on several overly optimistic assumptions, such as the amount of labor needed for construction.

We made 3 recommendations to help the Navy calculate a more realistic cost estimate. 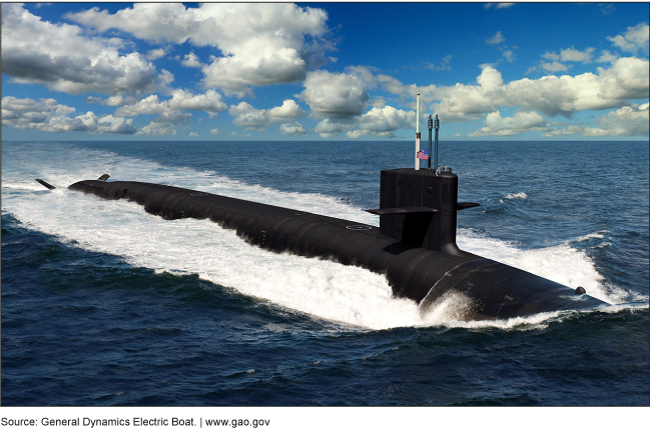 Submarine on the water's surface

The Navy's goal is to complete a significant amount of the Columbia class submarine's design—83 percent—before lead submarine construction begins in October 2020. The Navy established this goal based on lessons learned from another submarine program in an effort to help mitigate its aggressive construction schedule. Achieving this goal may prove to be challenging as the shipbuilder has to use a new design tool to complete an increasingly higher volume of complex design products (see figure). The shipbuilder has hired additional designers to improve its design progress. The Navy also plans to start advance construction of components in each major section of the submarine, beginning in fiscal year 2019, when less of the design will be complete.

The Navy's $115 billion procurement cost estimate is not reliable partly because it is based on overly optimistic assumptions about the labor hours needed to construct the submarines. While the Navy analyzed cost risks, it did not include margin in its estimate for likely cost overruns. The Navy told us it will continue to update its lead submarine cost estimate, but an independent assessment of the estimate may not be complete in time to inform the Navy's 2021 budget request to Congress to purchase the lead submarine. Without these reviews, the cost estimate—and, consequently, the budget—may be unrealistic. A reliable cost estimate is especially important for a program of this size and complexity to help ensure that its budget is sufficient to execute the program as planned.

The Navy is using the congressionally-authorized National Sea-Based Deterrence Fund to construct the Columbia class. The Fund allows the Navy to purchase material and start construction early on multiple submarines prior to receiving congressional authorization and funding for submarine construction. The Navy anticipates achieving savings through use of the Fund, such as buying certain components early and in bulk, but did not include the savings in its cost estimate. The Navy may have overestimated its savings as higher than those historically achieved by other such programs. Without an updated cost estimate and cost risk analysis, including a realistic estimate of savings, the fiscal year 2021 budget request may not reflect funding needed to construct the submarine.

The Navy has identified the Columbia class submarine program as its top acquisition priority. It plans to invest over $100 billion to develop and purchase 12 nuclear-powered ballistic missile submarines to replace aging Ohio class submarines by 2031.

The National Defense Authorization Act for Fiscal Year 2018 and House Report 115-200 included provisions that GAO review the status of the program. This report examines (1) the Navy's progress and challenges, if any, in meeting design goals and preparing for lead submarine construction; (2) the reliability of the Navy's cost estimate; and (3) how the Navy is implementing a special fund and associated authorities to construct Columbia class submarines.

This is a public version of a sensitive report that GAO issued in March 2019. Information that the Department of Defense (DOD) deemed sensitive has been omitted.