The Great Lakes-St. Lawrence Seaway serves more than 100 ports and supplies drinking water for millions of people. To protect it, federal law requires foreign commercial vessels to use local registered pilots for navigation. The Coast Guard manages a program that oversees the pilots and sets their fees.

Shipping industry representatives and others have suggested changes to the program. This report discusses these options. Industry, for example, has urged opening pilot services to market competition. Coast Guard officials and pilots told us competition would be difficult because of the specialized training and local experience pilots need. 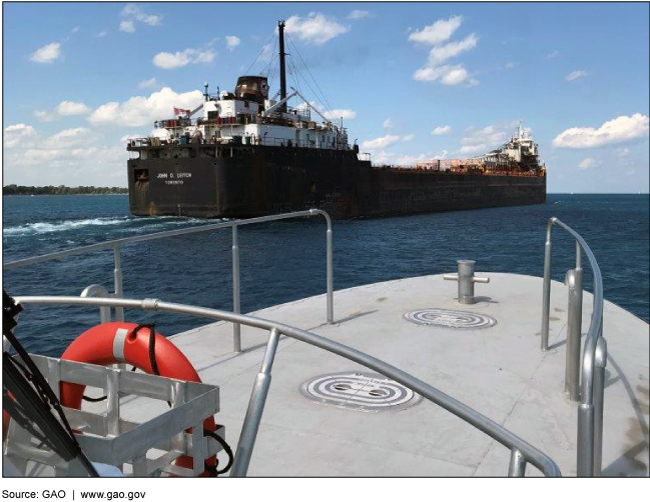 A freighter on a clear day, photographed from over the bow of a boat

The Coast Guard manages the Great Lakes Pilotage Program to implement federal requirements that any oceangoing or foreign commercial vessel entering the Great Lakes-St. Lawrence Seaway use a registered marine pilot to safely navigate the vessel through the system. The Coast Guard employs several mechanisms for communicating with stakeholders and obtaining their input on the program. These include the federal rulemaking process, meetings of the Great Lakes Pilotage Advisory Committee, and ad-hoc communications with local pilotage stakeholders. Since 2016, when the Coast Guard implemented several programmatic changes, shipping industry stakeholders and pilots have identified a number of issues that they would like to have considered for the program. The issues cited by shipping industry stakeholders relate, in large part, to the financial impacts associated with the Coast Guard's methodology for calculating pilotage rates. The issues raised by Great Lakes pilots and their representatives are varied and include changes that may be needed to respond to the increasing volume and variety of vessels needing Great Lakes pilotage services, such as cruise ships.

Shipping industry stakeholders and others have suggested potential alternatives to the structure and governance of Great Lakes pilotage. The proposed alternatives include consolidating the three U.S. pilot associations and districts, revising the existing governance structure and entities responsible for pilotage rate-setting, and introducing some level of competition for providing pilotage services. Each of these options presents various tradeoffs. For example, it is unclear if consolidating the three associations and districts would result in cost savings because there are relatively few administrative positions that could be reduced. According to the Coast Guard and pilot representatives, the specialized training and local experience needed to become registered pilots also presents a challenge to implementing competition because there is generally a limited supply of pilots available to compete in the same geographic area. Further, many of the governance structures and procedures of the existing Great Lakes pilotage system were established by statute and revisions would require legislative changes.

The Great Lakes-St. Lawrence Seaway maritime transportation system is the longest inland navigation system in the world. In 2016, the Coast Guard implemented a number of changes, including amending its methodology for setting the rates charged to shippers for using U.S. marine pilotage services in these waters.

GAO reviewed applicable laws, Coast Guard rulemakings from 2016-2019, Great Lakes Pilotage Advisory Committee meeting minutes for 2017 and 2018, and issues identified by stakeholders. GAO also interviewed a range of stakeholders, including shipping industry and pilot representatives, to obtain perspectives on the Coast Guard's management of the program and any alternative governance options that may exist.