In FY 2018, nearly 13 million students received over $122 billion in federal assistance to pursue higher education through programs authorized under Title IV of the Higher Education Act.

The Department of Education administers these programs and is responsible for accountability over them to protect students and the federal government's investment in higher education.

We testified about opportunities to strengthen federal higher education accountability in three areas: 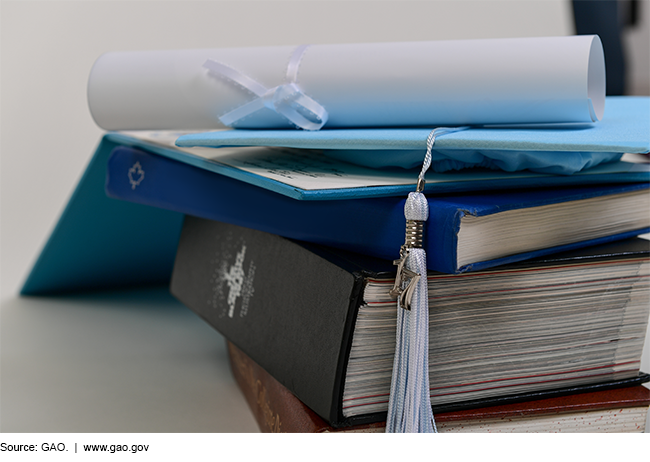 Photo of books, a diploma, and a graduation cap.

Educational quality. Accreditors—independent agencies responsible for ensuring that schools provide a quality education—must be recognized by the Department of Education (Education) as reliable authorities on educational quality. The accreditors can issue sanctions, including terminations and probations, to schools that do not meet accreditor standards. However, GAO previously found that schools with weaker student outcomes were, on average, no more likely to be sanctioned by accreditors than schools with stronger student outcomes, and Education does not make consistent use of sanction data that could help it identify insufficient accreditor oversight. In 2014, GAO recommended that Education use accreditor data in its recognition review process to determine whether accreditors are consistently applying and enforcing their standards to ensure schools provide a quality education. Education agreed with the recommendation, but has yet to use this data in this manner.

Financial stability. Education uses a financial composite score to measure the financial health of schools participating in federal student aid programs, and increases its oversight of schools when it identifies concerns to protect against the risk of school closures. School closures, although rare, can result in hundreds of millions of dollars in unrepaid federal student loans and displacement of thousands of students. However, the composite score has been an imprecise risk measure, predicting only half of closures from school years 2010-11 through 2015-16. This is due in part to the fact that the composite score does not reflect changes in accounting practices and standards, relies on outdated financial measures, and is vulnerable to manipulation. Despite these limitations, Education has not updated the composite score since it was first established more than 20 years ago. In 2017, GAO recommended that Education update its financial composite score. Education has proposed some revisions, but changes have not yet been implemented to protect students and taxpayers against financial risks.

Student loan defaults. According to federal law, schools may lose their ability to participate in federal student aid programs if a significant percentage of their borrowers default on their student loans within the first 3 years of repayment. However, GAO previously found that some schools managed these default rates by hiring consultants that encouraged borrowers with past-due payments to put their loans in forbearance, an option that allows borrowers to temporarily postpone payments and bring past due loans current. Although Education officials and student loan experts said forbearance is intended to be a short-term option, GAO's analysis of Education data found that 20 percent of borrowers who began repaying their loans in 2013 had loans in forbearance for 18 months or more. These borrowers defaulted more often in the fourth year of repayment, when schools are not accountable for defaults, suggesting long term forbearance may have delayed—not prevented—default. In 2018, GAO suggested that Congress consider statutory changes to strengthen schools' accountability for student loan defaults. Legislation has not yet been enacted.

In fiscal year 2018, nearly 13 million students and their families received over $122 billion in federal assistance to help them pursue higher education through programs authorized under Title IV of the Higher Education Act of 1965, as amended. Education administers these programs, and is responsible, along with accreditors and states, for maintaining accountability and protecting the federal investment in student aid for higher education.

This testimony summarizes the findings and recommendations from GAO's prior reports, issued between 2014 and 2018, examining Education's role in: (1) recognizing accrediting agencies, (2) overseeing the financial condition of schools, and (3) overseeing schools' student loan default rates. This statement also updates the status of selected recommendations and a matter for congressional consideration.