The most common source of lead exposure for children comes from paint in buildings built before 1978—the year the government banned the sale of lead-based paint. In schools, lead dust can come from disturbing lead paint during renovations, deteriorating lead paint, and lead-contaminated soil.

We surveyed schools across the U.S. on how they deal with lead paint. Among other things, we found

About a third of public school students, about 15.3 million, were in school districts that inspected for lead paint

About half the districts that inspected found lead paint. All that found it reported plans or actions to reduce or eliminate it 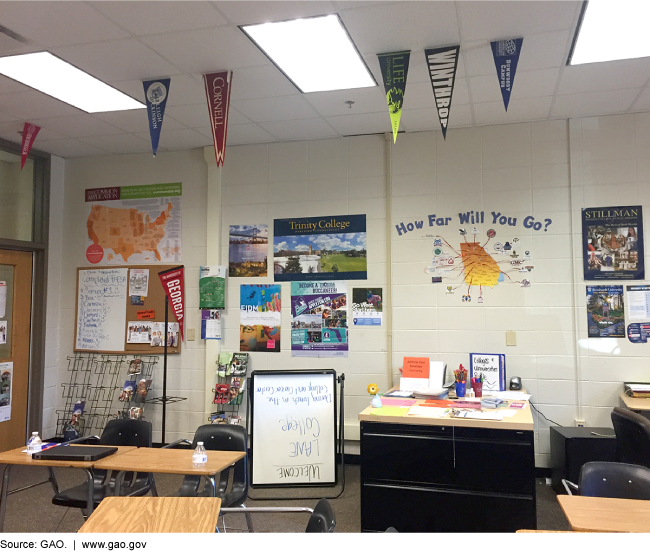 A high school classroom with college pennants hanging from the ceiling.

Estimates generated from GAO's survey results are generalizable to the 70 percent of school districts nationwide with at least one school built before 1978 and which obtained drinking water from a public water system (the focus of GAO's July 2018 report).

Recent revelations of lead exposure—in Flint, Michigan through drinking water and in East Chicago, Indiana through contaminated soil and lead dust from past industrial activities—have renewed public awareness about the dangers lead exposure poses to public health, including the health of school-age children. According to the Centers for Disease Control and Prevention, no safe blood lead level in children has been identified. Even though the extent to which children are exposed to lead has been substantially reduced since the 1970s, it is unclear how many school buildings still have lead-based paint.

GAO was asked to study inspection and remediation efforts that protect children from exposure to lead in schools. In July 2018, GAO reported on lead in school drinking water. In this report, GAO describes the extent to which school districts reported inspecting for, and remediating, lead-based paint in schools.

To do this, GAO used survey and interview data collected as part of its July 2018 work on lead in school drinking water. For that work, GAO surveyed 549 randomly selected school districts from July to October 2017 asking whether they had inspected for, discovered, or remediated lead-based paint in the past 12 months. GAO also visited or interviewed officials in 17 school districts from February to October 2017. These districts were located in five states—Georgia, Illinois, Massachusetts, Oregon, and Texas—and were selected because they vary in population density, geographic location, and the extent to which they required school-based lead testing and remediation with respect to drinking water (the focus of GAO's July 2018 report). GAO also reviewed relevant federal laws, regulations, and guidance.

Lead Safety at Home and in School

Exposure to lead can harm a child’s brain, growth, behavior, and ability to learn. No safe blood...
Blog Post