Demand for commercial space launches, which send satellites into orbit for government and private customers, is expected to increase in the coming years.

The Federal Aviation Administration’s Office of Commercial Space Transportation oversees the commercial space transportation industry. However, we found that the office doesn’t project its workload beyond a 2-year budget cycle, which means that it may not be planning effectively or strategically for its future workforce needs.

We made recommendations to help the office ensure that its future staff is the appropriate size and has the kinds of skills they will need to oversee this industry. 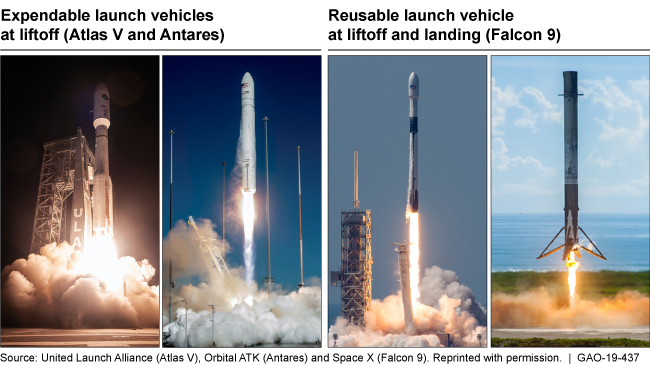 The Office of Commercial Space Transportation (AST) within the Federal Aviation Administration (FAA), in collaboration with other FAA offices, is taking a range of actions, such as testing new technologies, to improve how efficiently FAA integrates space vehicle launch operations into the national airspace. According to FAA officials, the amount of airspace that FAA closes to other airspace users is larger and remains closed longer than may be needed to ensure public safety. To help remedy this situation, FAA is piloting prototype technologies that would collect launch vehicles' location data in real-time and transmit them to air traffic controllers. Officials said the earliest these technologies could be implemented would be 2022. In March 2019, FAA published an announcement seeking interest from industry on partnering with FAA to further develop the technologies. Meanwhile, FAA is assessing how existing air traffic control technologies could be used to help reduce the effects of launches on other airspace users.

Since 2016, AST has taken steps to improve how it determines its current workforce needs to carry out its mission including licensing commercial launch vehicle operations. These steps include more comprehensively monitoring staff time spent on specific activities and measuring the volume of the staff's work. While AST officials told us that AST is planning to continue to improve its workforce-planning efforts, GAO found that some aspects of AST's efforts fall short of key principles of strategic workforce planning. Such principles underscore the importance of determining both current and future workforce needs and identifying potential gaps in employee skills. For example:

AST does not project its workload beyond a 2-year budget cycle, limiting its ability to effectively and strategically plan for its longer-term workforce needs. According to officials, it can take a few years for engineers with certain skills to be trained and have sufficient experience to lead projects. Further, AST officials told GAO that hiring technically qualified personnel, including positions that require considerable training and experience to be a fully functioning employee, is challenging. AST officials said that they are considering projecting their workload estimates further into the future, but they have neither formally committed to doing so nor established a timeline with milestones.

AST officials acknowledged that the information AST currently collects on the skills of its staff is not sufficient to allow them to identify gaps between the skills and competencies needed and those that its workforce currently possesses or may need in the future, such as expertise in flight safety analysis. AST officials told GAO that they plan to develop a tool that could collect information annually from staff and managers about the specific skills and competencies that individual staff currently possess. As of May 2019, however, AST had neither developed a draft of the tool nor established a timeline for finalizing it. Without this information, AST lacks reasonable assurance that its current workforce possesses the requisite skills and competencies, and AST may not be best positioned to proactively determine how to align its staff to carry out its mission.

The commercial space transportation industry provides launch services that enable national-security and commercial satellites, among other things, to be sent into orbit for government and private customers. Continued growth and evolution in the industry is expected as reliance on space-based applications increases. AST is charged with overseeing the industry, including licensing and monitoring launch vehicle operations.

GAO was asked to review developments in this industry. This report (1) describes FAA's actions to integrate commercial space launches into the national airspace and (2) examines how well-positioned AST is to determine its current and future workforce needs, among other objectives. GAO reviewed relevant statutes, regulations, and FAA guidance; compared FAA's workforce management efforts to key principles for effective workforce planning; and interviewed FAA officials and U.S. commercial launch providers that had conducted an FAA-licensed launch as of January 2018, among other industry stakeholders.

GAO is making four recommendations on workforce planning to AST, including that AST establish a timeline for finalizing longer-term workload projections and that AST ensure that it collects information from staff on skills and competencies in those areas that are currently needed and may be needed in the future. AST concurred with the recommendations.