Noncitizens who serve in the U.S. military may be eligible for citizenship. If a noncitizen veteran violates immigration law, Immigration and Customs Enforcement may seek to remove the veteran from the country. However, ICE policies require it to take additional steps prior to removal actions, such as considering their service record.

We found ICE did not consistently follow these policies from 2013-2018. ICE also does not maintain complete electronic data on these veterans. As a result, ICE does not know how many veterans have been placed in removal proceedings or removed.

We recommended that ICE collect and maintain data on veterans. 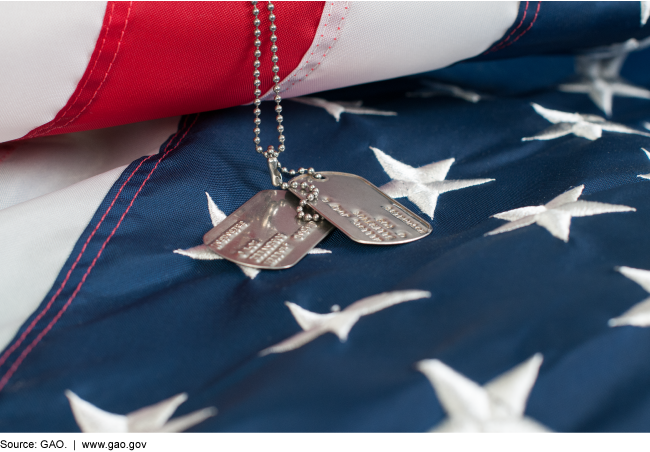 U.S. Immigration and Customs Enforcement (ICE) has developed policies for handling cases of noncitizen veterans who may be subject to removal from the United States, but does not consistently adhere to those policies, and does not consistently identify and track such veterans. When ICE agents and officers learn they have encountered a potentially removable veteran, ICE policies require them to take additional steps to proceed with the case. GAO found that ICE did not consistently follow its policies involving veterans who were placed in removal proceedings from fiscal years 2013 through 2018. Consistent implementation of its policies would help ICE better ensure that veterans receive appropriate levels of review before they are placed in removal proceedings. Additionally, ICE has not developed a policy to identify and document all military veterans it encounters during interviews, and in cases when agents and officers do learn they have encountered a veteran, ICE does not maintain complete electronic data. Therefore, ICE does not have reasonable assurance that it is consistently implementing its policies for handling veterans' cases.

U.S. Citizenship and Immigration Services (USCIS) and the Department of Defense (DOD) have policies facilitating the naturalization of noncitizen service members and veterans, and provide informational resources to noncitizen service members seeking naturalization. The number of military naturalization applications received by USCIS declined sharply from fiscal years 2017 to 2018, resulting in a decreased number of applications approved in fiscal year 2018. USCIS and DOD officials attributed this decline to several DOD policy changes that reduced the number of noncitizens joining the military .

Throughout U.S. history, noncitizens have served in the U.S. Armed Forces. Although the Immigration and Nationality Act allows noncitizen service members to acquire citizenship, some veterans may not apply or may not satisfy all eligibility criteria. If the Department of Homeland Security (DHS) determines that a noncitizen veteran is potentially removable, the veteran may be subject to administrative immigration enforcement and removal. ICE, among other things, is responsible for identifying and removing aliens who violate U.S. immigration law.

GAO was asked to review issues related to the removal of noncitizen veterans. This report examines (1) the extent to which ICE has developed and implemented policies for handling and tracking cases of potentially removable veterans; (2) how federal agencies facilitate the naturalization of noncitizen service members and veterans, and what is known about the number who have applied for naturalization; and (3) how removal affects veterans' eligibility for and access to VA benefits and services. GAO reviewed documentation, met with agency officials, analyzed available data on veterans placed in removal proceedings, and conducted a review of removed veterans' alien files. GAO also analyzed data on military naturalization applications.

GAO recommends that ICE (1) ensure consistent implementation of its existing policies for handling veterans' cases; (2) develop a policy or revise its current policies to identify and document veterans; and (3) collect and maintain complete data on veterans in removal proceedings or who have been removed. DHS concurred with GAO's recommendations.