The Missile Defense Agency has made progress on a system that detects and intercepts missiles. However, it didn't meet its delivery and testing goals.

Several years of construction delays at a site in Poland required the agency to push the system's delivery date to 2020. At this site, the system could protect parts of Europe from missiles launched in the Middle East. Testing has also been reduced or deferred—leaving its end users with less information about how the system will eventually work.

We recommended the Missile Defense Agency use the delay to test the system and ensure it can protect U.S. allies against ballistic missile threats. 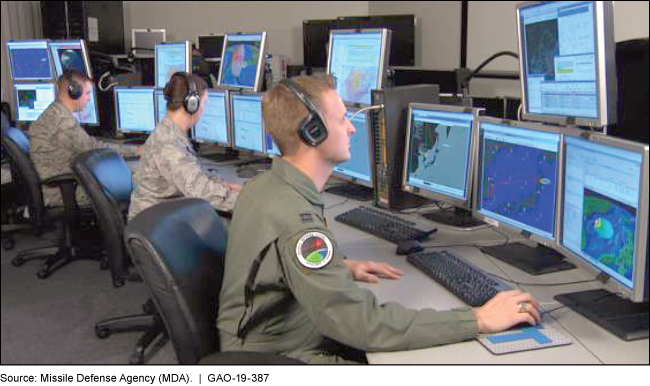 A uniformed servicemember wearing a headset and sitting at a bank of computers.

In fiscal year 2018, the Missile Defense Agency (MDA) made progress toward achieving its delivery and testing goals for some of the individual systems—known as elements—that combine and integrate to create the Ballistic Missile Defense System (BMDS). MDA is also making progress testing for integrated capabilities, which are achieved by combining BMDS elements. However, MDA did not meet its planned goals. The figure below shows MDA's progress delivering assets and conducting tests against its fiscal year 2018 plans.

MDA delivered a significant integrated capability for defending the United States, meeting a goal set by the Secretary of Defense in March 2013 to increase the inventory of ground-based interceptors by December 2017.

Other on-time deliveries included software upgrades and additional assets. However, developmental challenges and testing failures contributed to MDA being unable to deliver all assets as planned.

MDA completed four of eight flight tests. MDA successfully conducted testing to support a production decision; however, it was unable to complete its annual test plan due to failures, cancellations, and delays.

MDA has delayed the delivery of the BMDS's European Phased Adaptive Approach (EPAA) Phase 3—which is intended to protect allies from Iranian threats—until 2020. Construction contractor issues at the planned Aegis Ashore site in Poland drove the delay. At the same time, testing for EPAA Phase 3 against planned threats has been substantially reduced and other vital testing has been deferred until after delivery. MDA officials consider EPAA testing for Phase 3 delivery complete. However, DOD guidance and acquisition best practices stress the importance of testing to understand the extent of capabilities and how to deploy them. The 18-month delay to EPAA Phase 3 provides MDA an opportunity to conduct additional testing and collect more performance data. This testing could provide the warfighter with more information and confidence in the system's ability to protect our allies against expected ballistic missile threats.

For over half a century, the Department of Defense (DOD) has funded efforts to defend the United States from ballistic missile attacks. From 2002 to 2017, MDA has received about $142 billion and has requested 46.7 billion through fiscal year 2023 to develop the BMDS. The BMDS consists of diverse and highly complex land-, sea-, and space-based systems and assets located across the globe, including planned sites in Romania and Poland to protect United States forces and allies in Europe.

The National Defense Authorization Act for Fiscal Year 2012, as amended, included a provision that GAO annually assess and report on MDA's progress. Among other objectives, this report addresses for fiscal year 2018 (1) the progress MDA made in achieving delivery and testing goals and (2) the extent to which MDA made progress in developing and delivering integrated regional BMDS capabilities. GAO reviewed the planned fiscal year 2018 baselines and other program documentation and assessed them against program and baseline reviews and GAO's acquisition best practices guides, and interviewed officials from relevant agencies.

GAO is recommending that MDA use the schedule margin afforded by the European Phased Adaptive Approach Phase 3 delay to conduct testing necessary to more thoroughly assess, prior to delivery, the capabilities and limitations of Phase 3 against the expected missile threat. DOD partially concurred with our recommendation. GAO continues to believe the recommendation is valid.