About 10% of Americans per year cared for an elderly parent or spouse from 2011 through 2017. These family caregivers may risk their long-term financial security if they have to work less or pay for caregiving expenses such as travel or medicine.

More than half of people who cared for parents or spouses said they went to work late, left early, or took time off for care 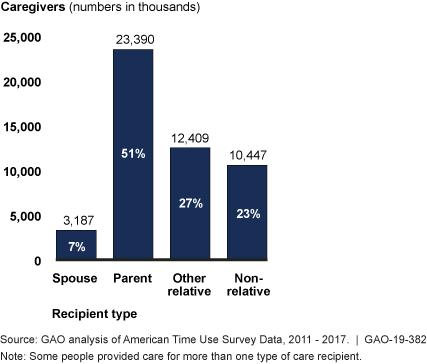 Bar chart showing most caregivers are caring for an elderly parent.

Some caregivers experienced adverse effects on their jobs and had less in retirement assets and income.

Expert interviews and a review of relevant literature identified a number of actions that could improve caregivers' retirement security, which GAO grouped into four policy categories. Experts identified various benefits to caregivers and others from the policy categories—as well as pointing out possible significant costs, such as fiscal concerns and employer challenges—and in general said that taking actions across categories would help address caregivers' needs over both the short-term and long-term (see figure). Several experts also said public awareness initiatives are critical to helping people understand the implications of caregiving on their retirement security. For example, they pointed to the need for education about how decisions to provide care, leave the workforce, or reduce hours could affect long-term financial security.

According to the U.S. Census Bureau, the number of people in the United States over age 65 is expected to almost double by 2050. As Americans age, family caregivers, such as adult children and spouses, play a critical role in supporting the needs of this population. However, those who provide eldercare may risk their own long-term financial security if they reduce their workforce participation or pay for caregiving expenses. GAO was asked to provide information about parental and spousal caregivers and how caregiving might affect their retirement security.

This report (1) examines what is known about the size and characteristics of the parental and spousal caregiving population, including differences among women and men; (2) examines the extent to which parental or spousal caregiving affects retirement security; and (3) identifies and discusses policy options and initiatives that could improve caregivers' retirement security.

GAO analyzed data from three nationally representative surveys; conducted an extensive literature review; and interviewed experts who are knowledgeable about caregiving or retirement security, engaged in research or advocacy around caregiving, or represent groups that might be affected by the identified policy approaches.

Looking for some entertainment as you try to beat the heat by the pool? Put on your headphones and...
Blog Post