This testimony discusses the Department of Homeland Security's management of immigration in the Commonwealth of the Northern Mariana Islands, a U.S. territory. Foreign workers make up a large part of the workforce. Proposed legislation could let some longer-term foreign workers and others gain CNMI resident status.

DHS issues transitional permits that let qualified workers stay for up to a year. The numerical limits for these permits have changed several times.

In 2019, DHS removed the Philippines from a list of nations whose residents can obtain H-2B work visas. Mariana officials said this will make it hard to find construction workers.

[This text was changed to correct terminology in some areas.]

Past, Current, and Future Limits on Transitional Worker Permits in the Commonwealth of the Northern Mariana Islands, by Fiscal Year 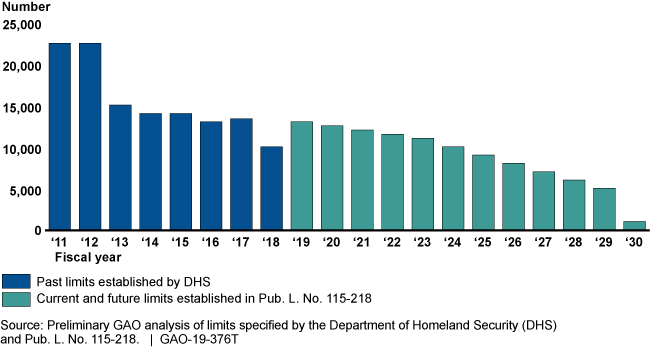 Under the Consolidated Natural Resources Act of 2008 (CNRA), the Department of Homeland Security (DHS) established the nonimmigrant Commonwealth of the Northern Mariana Islands (CNMI)–Only Transitional Worker program in 2011. Through the program, eligible foreign nationals can obtain CNMI-Only Transitional Worker (CW-1) permits to work temporarily in the CNMI. Under H.R. 560, foreign nationals who meet additional eligibility requirements could be eligible to receive CNMI resident status if they were admitted annually to the CNMI as a CW-1 worker in fiscal years 2015 through 2018. GAO's preliminary analysis of DHS data found that 2,875 (about 32 percent) of 8,995 workers with CW-1 permits for fiscal year 2018 had maintained continuous employment each fiscal year since 2015 (i.e., received a CW-1 permit annually). While DHS data show the number of approved CW-1 permit holders declined from fiscal year 2017 to fiscal year 2018 (see figure), the number of H-2B beneficiaries—who often fill construction jobs—increased from 0 to 3,058. In January 2019, DHS removed the Philippines from the list of countries eligible for the H-2B program.

Notes: For fiscal years 2012 through 2018, DHS established an annual limit on the number of CW-1 permits, which allow qualified nonimmigrants to work temporarily in the Commonwealth of the Northern Mariana Islands (CNMI).

aFor fiscal year 2016, DHS approved 530 permits in excess of the numerical limit to compensate for expected visa denials by the Department of State.

In 2009, DHS began granting discretionary parole that authorized temporary stays for certain CNMI residents, such as spouses and children of U.S. citizens. These individuals may have been inadmissible or otherwise ineligible for admission to the United States, according to DHS. However, in December 2018, DHS announced that it was terminating parole for certain categories of residents in response to Executive Order 13767, issued in 2017. The order called on DHS to take appropriate action to ensure that parole authority is exercised only on a case-by-case basis, among other things. According to DHS, 1,039 individuals in the terminated categories had been granted parole until December 31, 2018. Under H.R. 560, some of these individuals could be eligible to apply for CNMI resident status.

The 1976 covenant defining the political relationship between the CNMI and the United States exempted the CNMI—a U.S. territory north of Guam—from certain federal immigration laws. However, the covenant preserved the right of the U.S. government to apply federal law in these exempted areas. The CNRA, which amended a joint resolution approving the covenant, generally established federal control of CNMI immigration beginning in 2009.

In 2009, DHS began implementing, among other things, a foreign worker permit program to address CNRA provisions specific to the CNMI. DHS also began using its discretionary authority under the INA to parole certain groups of individuals into the CNMI (i.e., allow them to be temporarily present). Congress has amended the CNRA several times with provisions that affected the total number of permits allocated and the distribution of permits. Proposed bill H.R. 560 would further modify the CNRA by establishing a CNMI resident status for certain individuals. Among its other provisions, the CNRA allows CNMI employers to petition for H-2 visas for temporary workers without counting the visas against a numerical restriction.

Drawing from ongoing work, this testimony discusses DHS's implementation of (1) selected CNRA provisions regarding foreign workers, among others, in the CNMI and (2) its discretionary parole authority under the INA as applied in the CNMI. GAO updated information from May 2017 (GAO-17-437) and February 2018 (GAO-18-373T), reviewed relevant legal documents, and analyzed DHS data.