Students may attend alternative K-12 public schools due to issues like poor grades and disruptive behavior. Some students attend for a few days to a few years, while others cycle in and out.

Among other things, we found:

Enrollment at these schools dropped between school years 2013-14 and 2015-16. Declines in White and Hispanic enrollment accounted for most of the drop

Some groups, such as Black boys and boys with disabilities, were overrepresented—particularly in schools with a discipline focus

Percentage of Public Schools that Are Alternative by District, School Year 2015-16 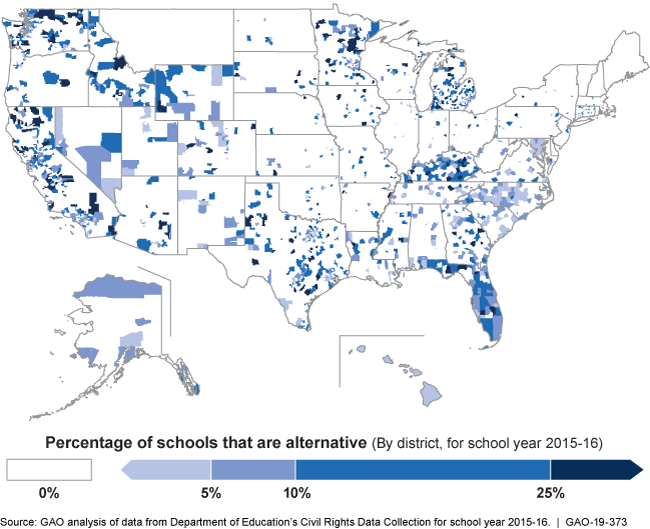 Students who attend public K-12 alternative schools may be at risk of educational failure for many reasons, including poor grades, disruptive behavior, mental health issues, and other life circumstances. Movement of students in and out of alternative schools can be fluid, with some students attending for a few days to a few years, and some cycling in and out of these schools repeatedly. Support staff, such as school psychologists and social workers, can play a role in supporting students’ health, behavioral, and emotional needs.

In commenting on this report, Education expressed concern that GAO's analysis could confuse readers about whether race/ethnicity and other demographic variables are the cause of disproportionality or are simply correlated. GAO believes this concern is misplaced because the report clearly states that GAO's analysis is descriptive and does not imply causation or make inferences about disproportionality.