Not all federal funding is reviewed each year as part of the annual appropriations process. For example, Congress can make a law that allows an agency to collect fees for services, such as copyright registration fees, and use that money without further congressional action.

This report updates our inventory of this type of federal funding and helps provide visibility into spending authority that is not from the annual appropriations process. We found $3.2 trillion in such funding from fiscal year 1995 through fiscal year 2015 (the most recent data at the start of our work). This is an increase of 88% from fiscal year 1994 (our last update).

Over time, more federal funding was not reviewed each year as part of the annual appropriations process 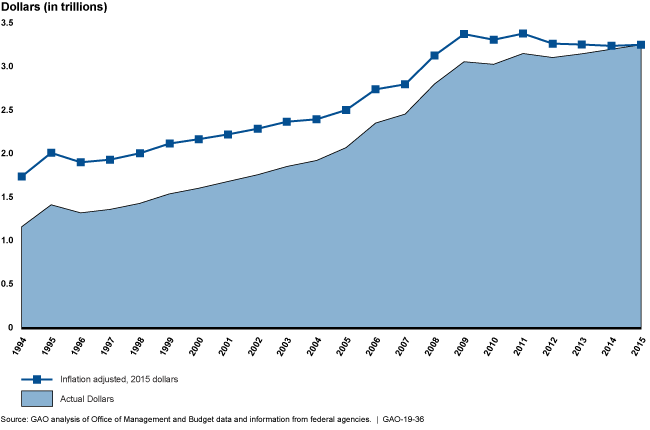 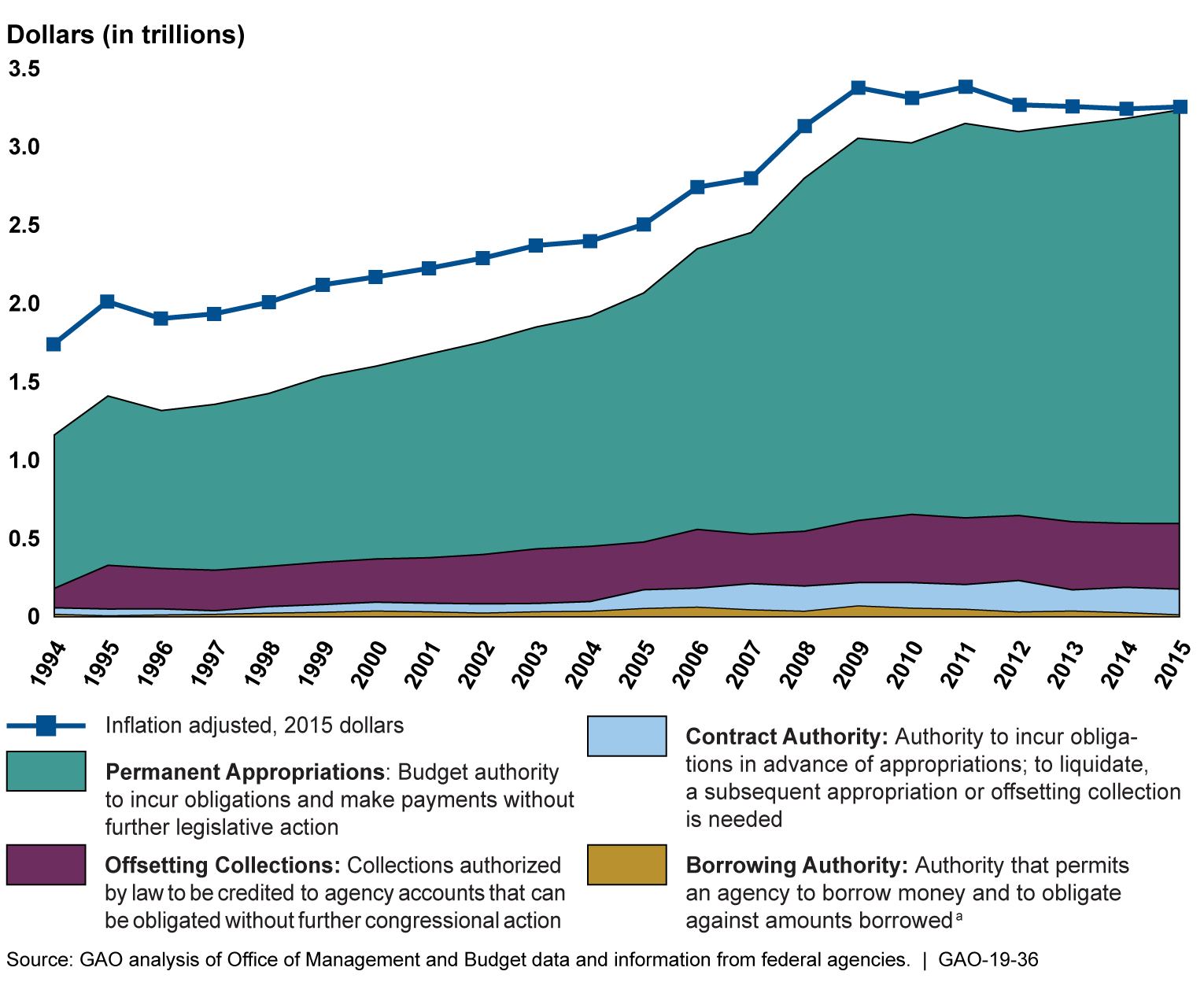 Note: Federal agencies reported no use of any monetary credits or bartering—the authority to make purchases with seller credits or something other than dollar amounts, such as land or services.
aFor purposes of this report, borrowing authority does not include the Department of the Treasury’s authority to borrow from the public or other sources under chapter 31, of title 31 of the U.S. Code.

Permanent appropriations fund federal entitlement programs, such as Medicare, administered by the Department of Health and Human Services (HHS), and the Social Security Administration's (SSA) Old-Age, Survivors, and Disability Insurance program. These programs are a significant proportion of reported budget authority in GAO's inventory of accounts in fiscal year 2015. These programs continue to show spending increases largely as a result of the aging population and rising health care costs and are projected to continue to increase in the future. In fiscal year 2015, 7 of the 10 accounts reporting the largest dollar amounts of spending authority and permanent appropriations funded entitlement programs.

Note: The “Other” category combines agencies with a much smaller percentage of spending authority and permanent appropriations use.

Sequestration--cancellation of budgetary resources under a presidential order--is a process established in statute which helps to enforce spending limits and thereby control the deficit. In fiscal year 2015, 57 percent of spending authority and permanent appropriations authorities were exempt from sequestration, up from 37 percent in fiscal year 1994. This means that fewer of these authorities were subject to this budgetary enforcement mechanism in fiscal year 2015.

GAO analyzed Office of Management and Budget (OMB) budget data to identify accounts with spending authority and permanent appropriations. GAO reviewed data through fiscal year 2015 because that was the most recent data available when GAO began its work. GAO reviewed agency information to confirm data and statutory authority. Agencies also reviewed and verified the final data for their accounts. For the sequestration designation, GAO analyzed OMB data for fiscal years 2013 and 2015--the most recently completed years for which sequestration occurred and OMB identified designations when GAO began its work.

GAO provided a draft of this report and the online dataset to the Director of OMB for review and comment. OMB staff provided technical comments, which GAO incorporated as appropriate.