We and others have found that at large financial institutions, management weaknesses—such as ineffective leadership by boards of directors, and compensation tied to quantity of rather than quality of loans—contributed to the 2007-2009 financial crisis.

We found regulators have improved their supervision of large banks’ management activities and generally followed leading practices. However, regulators could do a better job informing institutions of potential emerging problems.

We made 4 recommendations to further strengthen the regulators’ bank supervision policies and procedures. 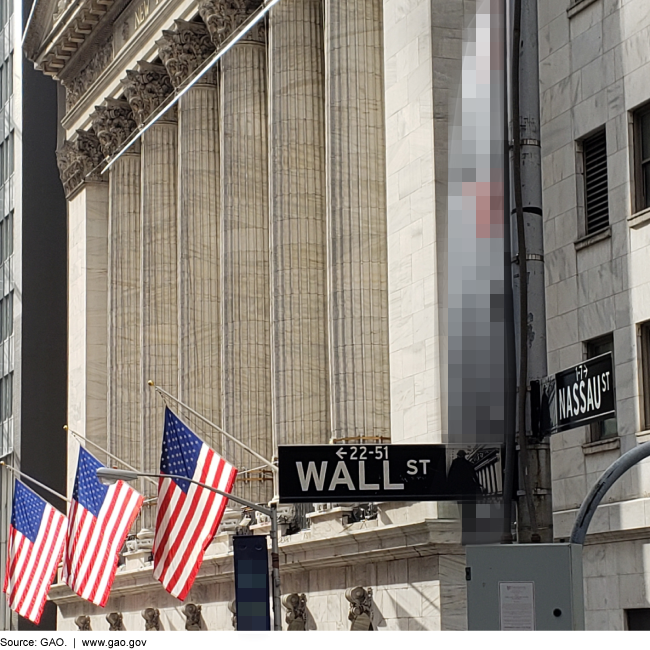 A side view of the New York Stock Exchange on Wall Street in New York City.

Since 2009, federal banking regulators have revised policies and procedures for use by examiners in supervising depository institutions' management activities (such as those related to corporate governance and internal controls) and for identifying and communicating supervisory concerns. For example, regulators differentiated levels of severity for supervisory concerns and specified when to communicate them to boards of directors at the depository institutions. GAO found that the updated policies and procedures generally were consistent with leading risk-management practices, including federal internal control standards.

Examination documents that GAO reviewed showed that examiners generally applied the regulators' updated policies and procedures to assess management oversight at large depository institutions. In particular, for the institutions GAO reviewed, the regulators communicated deficiencies before an institution's financial condition was affected, and followed up on supervisory concerns to determine progress in correcting weaknesses. However, practices for communicating supervisory concerns to institutions varied among regulators and some communications do not provide complete information that could help boards of directors monitor whether deficiencies are fully addressed by management. Written communications of supervisory concerns from the Federal Deposit Insurance Corporation (FDIC) and the Board of Governors of the Federal Reserve System (Federal Reserve) that GAO reviewed often lacked complete information about the cause of the concern and, for the Federal Reserve, also lacked information on the potential consequences of the concern, which in one instance led to an incomplete response by an institution. Communicating more complete information to boards of directors of institutions, such as the reason for a deficient activity or practice and its potential effect on the safety and soundness of operations, could help ensure more timely corrective actions.

Weaknesses identified after the 2007–2009 financial crisis included management weaknesses at large depository institutions and the need for federal regulators (FDIC, Federal Reserve, and OCC) to address the deficiencies in a timely manner. Concerns remain that positive economic results of recent years could mask underlying risk-management deficiencies.

When big banks failed during the 2007–2009 financial crisis, it wasn’t a complete surprise. Federal...
Blog Post