The President relies on a fleet of helicopters for transportation that has been in service for decades. The Navy plans to replace this fleet with 23 new helicopters, called VH-92As.

Our annual review of this acquisition found

The estimated cost has declined from $5.18 billion to $4.95 billion since 2014. This was in part because there have been few design changes

The program remains within its overall schedule. However, delays will give program officials 3 to 5 months less time to evaluate whether they are ready to begin production

The program continues to work on challenges in communication links, and other areas 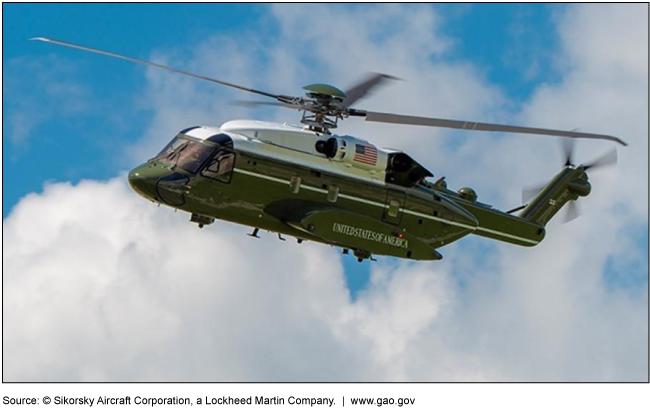 A photo of the first developmental VH-92A Presidential Helicopter in flight.

Acquisition cost estimates for the Presidential Helicopter Replacement Program (also known as the VH-92A) have declined from $5.18 billion to $4.95 billion, for 23 new helicopters, since the program started in April 2014 (see table), and the program remains within its planned schedule. The contractor attributes this cost decrease to several factors: stable requirements, a low number of design changes, and program efficiencies.

The program has delayed some program milestones—for example, its low-rate production decision—by 5 months from its original baseline goal. Although this remains within the approved schedule, the program will have less time than planned between the end of development testing and start of operational assessment. Program officials told GAO they expect to have enough information from both the government-led integrated testing and the operational assessment to inform the low-rate production decision.

Continuing development challenges concerning performance requirements may affect whether the program can deliver fully capable aircraft on time in the future. These include:

Landing zone suitability: As GAO found in 2018, the program has not yet met a key system capability requirement for landing the helicopter without damaging the landing zone—for example, the White House South Lawn. According to program officials, Sikorsky plans to have a solution for this performance requirement by November 2020 .

Mission communications system: The VH-92A program has experienced problems connecting the aircraft's communication system to secure networks, due to changes in network security requirements, presenting a new risk area for the program. The Navy anticipates having a fix by January 2020. These changes are expected to be incorporated into the four production representative helicopters being built under the development contract in time for the program's initial operational test and evaluation.

The mission of the presidential helicopter fleet is to provide safe, reliable, and timely transportation in support of the President. The Navy plans to acquire a fleet of 23 VH-92A helicopters to replace the current Marine Corps fleet of VH-3D and VH-60N aircraft. Initial delivery of VH-92A presidential helicopters is scheduled to begin in fiscal year 2020 with production ending in fiscal year 2023. The total cost of this acquisition program was originally estimated at almost $5.2 billion.

The National Defense Authorization Act of 2014 included a provision for GAO to report on the VH-92A program annually, until the Navy awards the full-rate production contract. This report discusses (1) the extent to which the program is meeting its cost and schedule goals and (2) challenges facing the program in system development.

GAO is not making any recommendations in this report, but will continue to monitor the potential cost growth and schedule delays as the program responds to challenges meeting capability requirements.