This report provides an update on the nation's fiscal health as of the end of FY 2018, and describes its likely fiscal future if policies don’t change.

Other agencies join GAO in saying that the longer action is delayed, the greater and more drastic the changes will have to be

The 2018 Financial Report, the Congressional Budget Office, and GAO all project that federal debt held by the public will continue to grow unsustainably into the future. 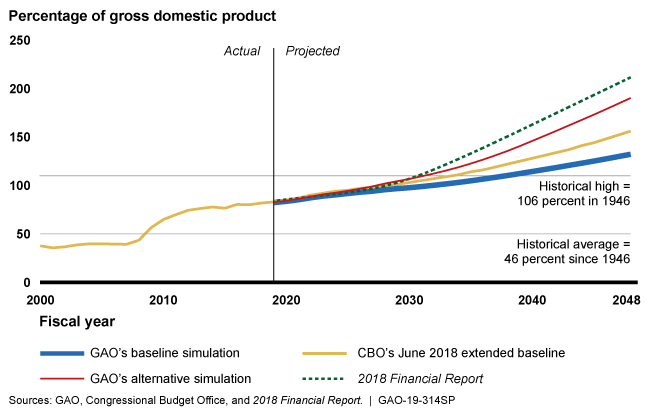 Congress and the administration face serious economic, security, and social challenges that will require difficult policy choices in the near term in setting national priorities and chartering a path forward for economic growth. This will influence the level of federal spending and how the government obtains needed resources. At the same time, the federal government is highly leveraged in debt by historical norms.

The 2018 Financial Report, the Congressional Budget Office (CBO), and GAO projections all show that, absent policy changes, the federal government’s fiscal path is unsustainable and that the debt-to-GDP ratio would surpass its historical high of 106 percent within 13 to 20 years (see figure). 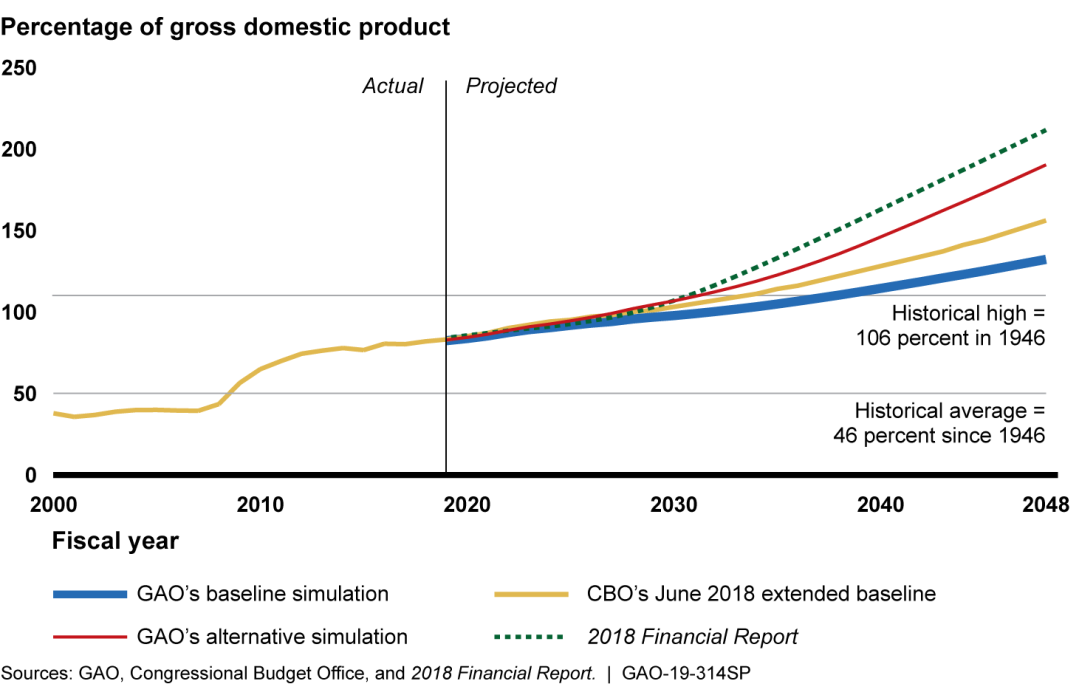 The 2018 Financial Report, CBO, and GAO state that the longer action is delayed, the greater and more drastic the changes will have to be. As shown below, major programs are projected to face financial challenges in the future.

aCBO did not report defense spending projections separately from total discretionary spending in its long-term projections after 2029.

Debt Limit is Not a Control on Debt: Alternative Approach Is Needed:

At the time of this report, Treasury is taking extraordinary actions to continue funding government activities since the debt limit suspension period ended on March 1, 2019. Failure to increase or suspend the debt limit in a timely manner disrupts the Treasury market and can increase borrowing costs. GAO has recommended possible alternative approaches to the current debt limit. Congress could consider these suggestions as part of a broader plan to put the government on a sustainable fiscal path.

Fiscal risks are responsibilities, programs, and activities that may legally commit or create expectations for future spending based on current policy, past practices, or other factors. These include risks stemming from unforeseen events to which the public expects a federal fiscal response, such as natural disasters and financial challenges.

Executive Agencies Have Opportunities to Contribute Toward Fiscal Health