After a significant offshore oil spill—such as the Exxon Valdez or Deepwater Horizon incidents—it can take decades and billions of dollars to undo the environmental damage. A federal-state trustee council is set up after a spill to manage the money for related environmental restoration projects. 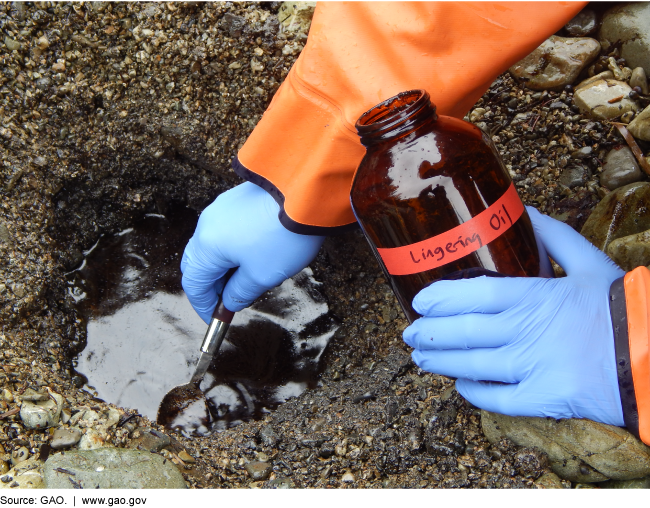 Photograph of a person's latex-gloved hands using a table spoon to scoop oil from a hole in the ground into a glass bottle.

The trustee councils, composed of federal and state members, have used portions of the restoration trust funds from the Exxon Valdez and Deepwater Horizon oil spill settlements to restore natural resources. From October 1992 to January 2018, the Exxon Valdez Oil Spill Trustee Council used about 86 percent of the fund's roughly $1 billion, primarily on habitat protection and restoration of damaged natural resources. According to the council, all but 5 of the 32 natural resources and human services identified as damaged by the spill have recovered or are recovering. The health of Pacific herring is one example of a resource that has not yet recovered. Further, the presence of lingering oil remains a concern almost 30 years after the spill. In May 2018, GAO accompanied trustee council researchers to the spill area and observed the excavation of three pits that revealed lingering oil roughly 6 inches below the surface of the beach, as captured in the photo below. The Deepwater Horizon Natural Resource Damage Assessment Trustee Council finalized a programmatic restoration plan in 2016; four trustee implementation groups have since issued initial restoration plans for designated restoration areas, and three anticipate issuing restoration plans in 2019 or later. From April 2012 to December 2017, the council used 13 percent of the at least $8.1 billion restoration trust fund, mostly on habitat protection, enhancing recreation, and marine wildlife and fishery restoration.

The Exxon Valdez and Deepwater Horizon oil spills are two of the largest offshore oil spills in U.S. history, causing long-lasting damage to marine and coastal resources. OPA includes provisions to prevent and respond to such oil spills by authorizing (1) federal-state trustee councils that manage billions of dollars from legal settlements and (2) an interagency committee to coordinate oil pollution research, among other things.

GAO was asked to review the federal government's response, restoration, and research efforts after the Exxon Valdez and Deepwater Horizon oil spills. This report examines, among other things, (1) how the trustee councils have used the restoration trust funds and the status of restoration and (2) the interagency committee's coordination of oil spill research efforts.

GAO reviewed the councils' plans for the funds and how they were used, federal funding of oil spill research by member agencies, and key laws. Also, GAO evaluated the coordination of such efforts against a leading collaboration practice. GAO interviewed members of the trustee councils and the interagency committee.

GAO recommends, among other things, that the interagency committee coordinate with the trustee councils to support their work and research needs. The agency agreed with GAO's recommendations.

Thirty years ago this month, the Exxon Valdez oil tanker hit a reef and spilled millions of gallons...
Blog Post