What happens when banks that are "too big to fail" start to fail?

During the 2007-2009 financial crisis, the federal government bailed out some big banks so their bankruptcies wouldn't disrupt the economy. Congress later passed legislation to limit future government intervention. In turn, related regulations prompted big banks to prepare strategies for entering bankruptcy, if needed, and deal with related legal and financial obstacles.

Most of the experts we interviewed said the strategies were likely to work if the bankruptcy were isolated to a single institution, but unlikely to work in the context of another widespread financial crisis.

The Federal Reserve is a key regulator of large U.S. financial institutions. 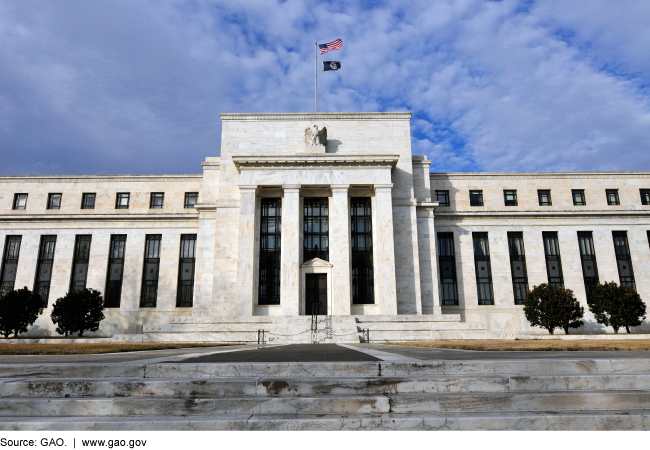 Photo of the Federal Reserve building.

The five U.S. global systemically important bank holding companies (GSIB) in GAO's review incorporated procedures and other controls in their 2017 resolution plans to mitigate financial and legal obstacles to orderly resolution under the U.S. Bankruptcy Code (Code). The distress or failure of a GSIB could cause significant disruption to the financial system or economy because of attributes such as its size, complexity, or interconnectedness. The GSIBs' plans describe their strategies for rapid and orderly resolution under the Code in the event of financial distress or failure. Each GSIB developed a resolution strategy using a single point-of-entry (SPOE); that is, only the GSIB holding company would enter bankruptcy. Before entering bankruptcy, the holding company would provide its subsidiaries with capital and liquidity to keep them solvent and enable their orderly wind-down or sale. However, a GSIB could lack sufficient capital and liquidity to keep subsidiaries solvent or face legal challenges from creditors. To mitigate such obstacles, the five GSIBs estimated the financial needs of subsidiaries under SPOE, pre-positioned loss-absorbing capital and long-term debt at key subsidiaries conducted legal analysis to identify potential creditor challenges, and took other actions. In their review, the Federal Deposit Insurance Corporation (FDIC) and Board of Governors of the Federal Reserve System (Federal Reserve) found no deficiencies with the GSIBs' 2017 plans.

Because no GSIBs have gone through bankruptcy using SPOE, the potential effectiveness of their controls cannot be known. However, experts GAO interviewed had the following views on the five GSIBs' controls to mitigate obstacles, the need for additional actions, and SPOE strategies.

Most experts viewed GSIB controls to mitigate financial obstacles as potentially somewhat effective. But some expressed concerns about the controls, partly because of the difficulty of forecasting capital and liquidity needs of subsidiaries and uncertainty about future events in a GSIB failure. To further mitigate financial obstacles, experts' suggestions included that the federal government provide a failed GSIB's subsidiaries with access to liquidity to promote market confidence. But a few experts said that such access would create moral hazard and reduce market discipline.

Experts had mixed views on the potential effectiveness of GSIB controls to mitigate creditor challenges and other legal obstacles but supported certain Code amendments to further mitigate the obstacles. Most experts generally supported amending the Code to limit creditors from challenging a GSIB's provision of capital and liquidity to its subsidiaries before filing for bankruptcy. But some were concerned about tradeoffs between interests of creditors and the public associated with such an amendment.

Most experts said a GSIB likely could execute its SPOE strategy successfully if its failure affected only itself. But most viewed success as unlikely if the failure occurred during a widespread market disruption. In that regard, some experts said it was important not to repeal the Orderly Liquidation Authority of the Dodd-Frank Wall Street Reform and Consumer Protection Act (Dodd-Frank Act)—which allows the federal government, if warranted, to resolve a GSIB outside the Code.

Legal and financial obstacles can undermine a GSIB's orderly resolution under the Code and result in a failure that harms U.S. financial stability. Pursuant to resolution plan authorities under the Dodd-Frank Act, FDIC and the Federal Reserve identified legal and financial obstacles they expected GSIBs to mitigate to show their ability to execute their SPOE strategies under the Code. Members of Congress and experts have proposed amending the Code to enhance the resolvability of GSIBs.

GAO was asked to review actions to mitigate financial and legal obstacles GSIBs could face under the Code. This report (1) describes actions GSIBs took to mitigate such obstacles and (2) analyzes expert views on the effectiveness of the actions, need for additional actions, and likely success of an SPOE strategy. GAO focused on five U.S. GSIBs with large portfolios of derivatives (because of resolution obstacles such financial contracts pose).