Each year millions of foreign visitors legally enter the United States on a temporary basis. Some remain longer than allowed.

We reviewed the Department of Homeland Security's (DHS) estimate for Congress of the number of visitors who arrived by sea or air and overstayed.

DHS calculated that about 1.3% of 52.7 million admissions in 2017 overstayed. DHS did not provide an overall estimate that included prior year overstays, citing unreliable earlier data.

DHS is also working on identifying overstays for those traveling by land, whose departures are more difficult to track than air and sea travelers. 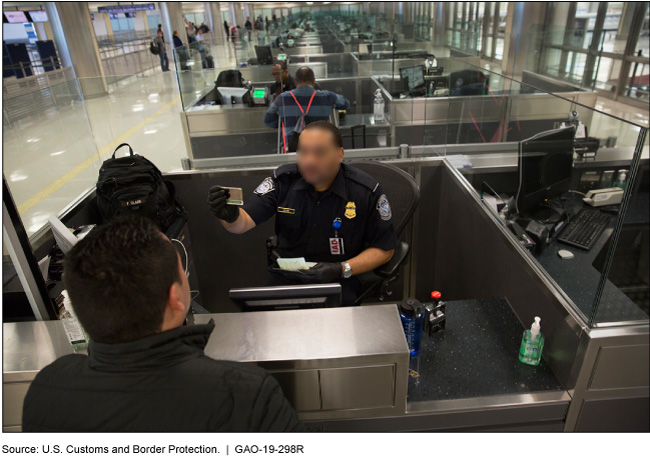 The Department of Homeland Security (DHS) has developed and implemented a metric to calculate the number and rate of air and sea overstays—nonimmigrants who remain in the United States beyond the expiration of their authorized period of stay—which it has published annually beginning with its fiscal year 2015 overstay report. As presented in the annual report, the overstay rate is an automated calculation based on the number of nonimmigrant admissions to the United States through air or sea ports of entry who were expected to, but did not, depart in a fiscal year divided by the total number of expected departures for that fiscal year. DHS has also taken steps to improve its identification of overstays and the calculation of the overstay rate by, for example, automating the exchange of nonimmigrant data between DHS components. Based on these and other improvements, DHS has included more complete data in the annual overstay report on more classes of admission over time, such as including foreign students beginning in fiscal year 2016.

DHS's fiscal year 2017 overstay report states that the report accounts for about 97 percent of all air and sea nonimmigrants expected to depart in fiscal year 2017. The remaining 3 percent pertained to classes of admission who are unlikely to overstay, according to DHS (e.g., foreign diplomats and flight crews). According to the fiscal year 2017 overstay report, there were about 52.7 million nonimmigrant admissions to the United States through air or sea ports of entry who were expected to depart the country in fiscal year 2017. DHS identified about 702,000 overstays during that time frame—1.33 percent of admissions. However, the overstay report does not include a metric for determining the total (i.e., cumulative) nonimmigrant air and sea overstay population in the United States at a given time as directed by the Explanatory Statement accompanying Consolidated Appropriations Act, 2018 (2018 Explanatory Statement). Specifically, the report does not include air and sea overstays from prior years who may remain in the United States. DHS officials stated that they are considering including the total number of suspected air and sea overstays expected to depart since fiscal year 2015—the first year CBP determined overstay data to be reliable—in future reports.

Although the overstay report identifies air and sea overstays, due to existing limitations in collecting departure data in the land environment, the 2017 overstay report provides limited departure and overstay information for land ports of entry, which DHS is required to collect and report by law. When DHS uses data collected at land ports of entry, it is primarily to match records of certain travelers arriving into the United States by air and sea to records of those that may have subsequently departed by land to Canada. However, DHS has efforts underway to collect biographic and biometric data on travelers departing the United States at land ports to help develop a more comprehensive overstay estimate. For example, in fiscal year 2017, CBP began planning for a pilot test at the San Luis and Nogales, Arizona, ports of entry to demonstrate the feasibility of acquiring photos of all arriving and departing travelers and comparing those photos using facial recognition to photos in government databases. CBP officials stated that the pilot test for arriving travelers began at the San Luis Port of Entry in September 2018 and the Nogales Port of Entry in October 2018.

The 2018 Explanatory Statement directed DHS to develop and report within 180 days after enactment (by September 2018) on a statistically-sound metric for measuring the total nonimmigrant air and sea overstay population in the United States at a given time. DHS responded to this directive through its Fiscal Year 2017 Entry/Exit Overstay Report.

The 2018 Explanatory Statement also included a provision for GAO to review DHS's report and provide a preliminary briefing to the House and Senate Appropriations committees on its review within 90 days of DHS providing its report to the committees. To examine how DHS identifies the total population of overstays who entered the United States through air and sea ports, GAO reviewed DHS's fiscal years 2015 through 2017 Entry/Exit Overstay Reports, including the findings and methodology, reviewed DHS documentation on how department officials determine the number of overstays, observed how DHS generates data for the overstay report by watching a DHS official extract data from DHS's overstay data system, and interviewed DHS officials.