In 2017, Hurricanes Irma and Maria damaged much of the electricity transmission and distribution systems in the U.S. Virgin Islands and Puerto Rico. This resulted in the longest blackout in U.S. history—about 11 months in Puerto Rico.

Federal agencies usually support local utilities in disaster responses. In Puerto Rico, agencies took unprecedented direct roles in grid restoration efforts. This was in part because the Puerto Rico electric utility, which was in debt before the storms, did not have the capacity to fully respond. The Federal Emergency Management Agency provided about $3.2 billion for electricity restoration as of July 2018. 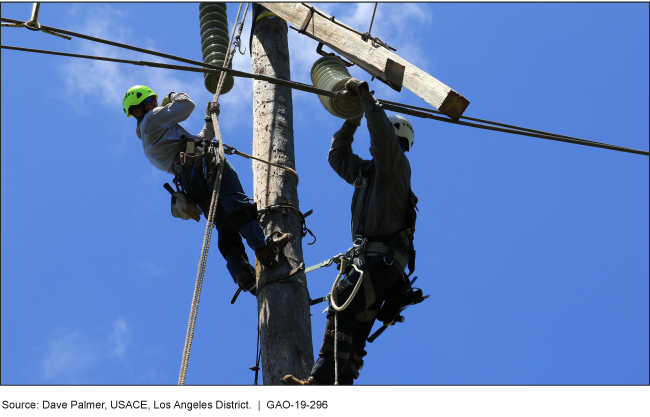 Federal agencies supported efforts to restore electricity in the U.S. Virgin Islands (USVI) and Puerto Rico through the types of support they traditionally provide following disasters and, in Puerto Rico, in some unprecedented ways.

USVI. Federal agencies provided traditional federal support to the electric utility's restoration efforts. For example, the Federal Emergency Management Agency (FEMA) provided financial assistance through its Public Assistance Program, and the Department of Energy (DOE) provided subject matter expertise to assist the local utility. In addition, the U.S. Army Corps of Engineers (USACE) provided generators for hospitals and other critical facilities. FEMA obligated about $795 million for these efforts as of July 20, 2018. According to the local utility, it took about 5 months for power to be restored to all customers with structures deemed safe for power restoration.

Puerto Rico. In addition to the traditional types of support, FEMA and USACE undertook unprecedented roles of helping to coordinate and directly assist with grid restoration in Puerto Rico. FEMA requested that USACE lead federal grid repair efforts because of the scale of the damage and because the Puerto Rico Electric Power Authority (PREPA) did not have the capacity to respond, according to FEMA officials. FEMA obligated about $3.2 billion for electricity restoration efforts as of July 20, 2018, and PREPA estimated that it took roughly 11 months for power to be restored to all customers with structures deemed safe for power restoration.

Various factors affected federal support for electricity grid restoration, according to officials GAO interviewed and documents reviewed. For example, getting the crews and materials needed to islands was more difficult and time-consuming than on the mainland. In Puerto Rico, PREPA was insolvent, which presented challenges for restoring the grid. For example, PREPA canceled its vegetation management program; this contributed to the destruction of the grid when the hurricane arrived, according to FEMA officials. In addition, FEMA did not anticipate or plan for the extensive federal role in grid restoration in Puerto Rico, and USACE did not have a contract in place to immediately initiate grid repair efforts, according to USACE officials. FEMA and USACE identified potential actions to address these challenges, such as reviewing advance contracts.

In 2017, Hurricanes Irma and Maria damaged much of the electricity grids' transmission and distribution systems in USVI and Puerto Rico. The hurricanes left most of USVI's 106,405 people and all of Puerto Rico's 3.3 million without power and resulted in the longest blackout in U.S. history.

Under the National Response Framework, electric utilities are responsible for repairing infrastructure and restoring service. They often use mutual assistance—voluntary partnerships with other electric utilities—to bring in additional resources to help restore electricity. Federal agencies provide financial assistance; help coordinate the federal response; and in severe emergencies, provide logistical support, such as assisting in damage assessments and location and transportation of repair crews and equipment.

GAO was asked to review the federal response to the 2017 hurricanes. This report provides information on federal support for restoring the electricity grids in Puerto Rico and USVI and factors affecting this support. GAO has ongoing work examining federal support to improve grid resilience in Puerto Rico.

GAO reviewed agency documents and funding data through July 20, 2018, the most recent data available; interviewed officials from FEMA, DOE, and USACE; and conducted site visits to Puerto Rico and USVI.