Every year, we identify and report on federal agencies, programs, and initiatives with fragmented, overlapping, or duplicative goals or activities; and ways to reduce costs or enhance revenue.

In our 9th annual report, we identify 98 new actions that Congress and executive branch agencies could take to improve operations across government. For example, better oversight of Medicaid spending could save hundreds of millions of dollars by identifying errors such as unallowable managed care costs.

Fully addressing new and remaining actions from our prior reports could lead to tens of billions of dollars in additional financial benefits. 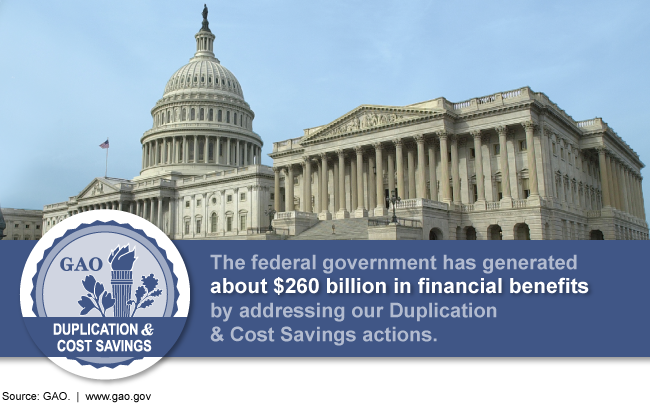 Graphic of the Capitol overlaid with text about $260 billion in financial benefits.

GAO's 2019 annual report identifies 98 new actions that Congress or executive branch agencies can take to improve the efficiency and effectiveness of government in 28 new areas and 11 existing areas. For example:

The Department of Energy could potentially avoid spending billions of dollars by developing a program-wide strategy to improve decision-making on cleaning up radioactive and hazardous waste to address the greatest human health and environmental risks.

The Centers for Medicare & Medicaid Services could also potentially save hundreds of millions of dollars by improving how it identifies and targets risk in overseeing Medicaid expenditures to identify and resolve errors.

Congress could enhance federal revenue by at least tens of millions of dollars annually through expanding the definition of allowable expenses authorized to be covered by the Foreign Military Sales administrative account, thereby likely reducing the need to cover these expenses with other appropriated funds.

The Department of Defense could expand its use of intergovernmental agreements to obtain military installation support services—such as waste management and snow removal—and potentially save millions of dollars annually.

The Department of Defense could also potentially save millions of dollars in its administration of military treatment facilities—such as hospitals and dental clinics—by analyzing medical functions for duplication, validating headquarters-level personnel requirements, and identifying the least costly mix of personnel.

The Department of Homeland Security should develop a strategy and implementation plan to help guide, support, integrate, and coordinate its multiple chemical defense programs and activities to better manage these fragmented efforts.

The federal agencies that coordinate research on quantum computing and synthetic biology could better manage fragmentation by agreeing on roles and responsibilities and identifying outcomes to help agencies improve their research efforts to maintain U.S. competitiveness in these areas.

GAO identified 33 new actions related to 11 existing areas presented in its 2011 to 2018 annual reports. For example:

Congress could provide the Internal Revenue Service the authority to require scannable codes on tax returns prepared electronically, but filed on paper, to improve its ability to combat tax fraud and noncompliance and save tens of millions of dollars annually.

The U.S. Mint could potentially reduce the cost of coin production by millions of dollars annually by changing the metal content of currency.

The Department of Defense could collect cost and technical data and lessons learned to make more informed decisions on using commercial spacecraft to host government sensors and communications packages, which could lead to considerable cost savings.

Significant progress has been made in addressing many of the 805 actions that GAO identified from 2011 to 2018 to reduce costs, increase revenues, and improve agencies' operating effectiveness. As of March 2019, Congress and executive branch agencies have fully addressed 436 actions (54 percent) and partially addressed 185 actions (23 percent). This has resulted in approximately $262 billion in financial benefits. About $216 billion of these benefits accrued between 2010 and 2018 and $46 billion are projected to accrue in future years. These are rough estimates based on a variety of sources that considered different time periods and utilized different data sources, assumptions, and methodologies.

Total Reported Financial Benefits of $262 Billion, as of March 2019

While Congress and executive branch agencies have made progress toward addressing actions that GAO has identified since 2011, further steps are needed. GAO estimates that tens of billions of additional dollars could be saved should Congress and executive branch agencies fully address the remaining 396 open actions, including the new ones identified in 2019. Addressing the remaining actions could lead to other benefits as well, such as increased public safety, better homeland and national security, and more effective delivery of services. For example:

The federal government continues to face an unsustainable long-term fiscal path caused by an imbalance between federal revenue and spending. While addressing this imbalance will require difficult policy decisions, opportunities exist in a number of areas to improve this situation, including where federal programs or activities are fragmented, overlapping, or duplicative.

To call attention to these opportunities, Congress included a provision in statute for GAO to identify and report on federal programs, agencies, offices, and initiatives—either within departments or government-wide—that have duplicative goals or activities. GAO also identifies areas that are fragmented or overlapping and additional opportunities to achieve cost savings or enhance revenue collection.

This report discusses the new areas identified in GAO's 2019 annual report; the progress made in addressing actions GAO identified in its 2011 to 2018 reports; and examples of open actions directed to Congress or executive branch agencies.

To identify what actions exist to address these issues, GAO reviewed and updated prior work, including recommendations for executive action and matters for congressional consideration.