Some victims and family members of victims of 9/11 and other terrorist attacks, as well as other members of the public, want better access to pre-trial hearings of alleged terrorists held at Naval Station Guantanamo Bay, Cuba. The public may view proceedings from 52 seats at the courtroom and at 5 closed-circuit television sites on military bases.

Options to increase access include adding closed-circuit television sites for the public and broadcasting via television or the internet.

We recommended that the Defense Department identify and analyze the risks associated with these options, and develop a strategy for implementing the viable ones.

The Viewing Gallery of the Courtroom at Naval Station Guantanamo Bay, Cuba 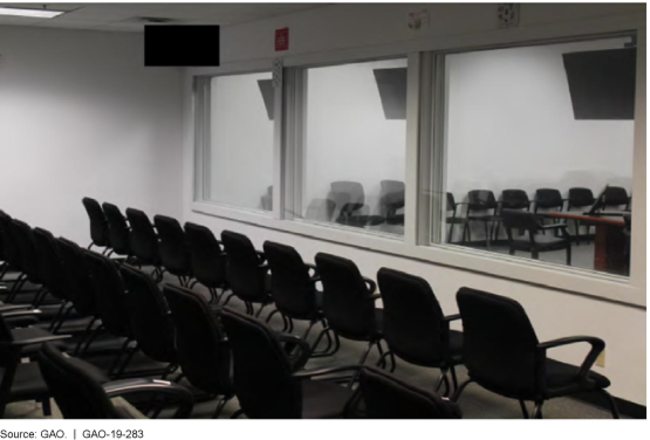 Photo of the courtroom and the viewing section.

The Department of Defense (DOD) currently facilitates public access to and information about military commissions' proceedings at Naval Station Guantanamo Bay (NSGB) in Cuba by:

The public faces various challenges in gaining access to military commissions' proceedings or obtaining information about them. First, some aspects of the proceedings limit public access, but addressing them is largely outside of DOD's control. For example, proceedings, by law, are held on NSGB—a location that is largely inaccessible to the general public. Further, cases currently before the military commissions have spent 4-10 years in pre-trial hearings with trials yet to be scheduled, which some suggest has lessened media coverage and public visibility. Second, there are other challenges that DOD officials have acknowledged that they have a greater ability to address. For example, the courtroom gallery is limited to 52 seats for those permitted to travel to NSGB. Additionally, all five CCTV sites are located within a span of 600 miles on the East Coast of the United States. However, victims and their family members—the primary intended users of these sites—often live a significant distance from these locations.

A number of options may potentially address some of the public access challenges identified. DOD could potentially expand the viewing gallery to accommodate more people as part of an ongoing project to renovate the NSGB courtroom. However, DOD officials cautioned that it would require a commensurate increase in the lodging needed to house more visitors, which may not be supported by current levels of resources. Further, DOD has two potential options for addressing challenges with the remote viewing of proceedings. First, DOD could potentially increase the number and geographic dispersion of CCTV sites. Second, DOD could potentially maximize public access by broadcasting proceedings via the television or internet. DOD officials acknowledged that both options are possible and likely would require a relatively small outlay of resources. However, broadcasting proceedings via the television or internet is currently prohibited by DOD's regulation, and DOD officials were especially concerned with the security implications of this option.

DOD is in the pre-trial phase of the military commissions' proceedings it is conducting to try the alleged perpetrators of terrorist attacks on the USS Cole and September 11, 2001. The Military Commissions Act of 2009 specifies that proceedings shall be publicly held unless the judge makes findings that justify a closed session, such as national security concerns.

The National Defense Authorization Act for Fiscal Year 2018 included a provision for GAO to study the feasibility and advisability of expanding access to commissions' proceedings that are open to the public. This report describes (1) how DOD currently facilitates public access to proceedings; (2) challenges the public faces in gaining access to or obtaining information on proceedings; and (3) what is known about potential options to address public access challenges, including any related tradeoffs. GAO analyzed relevant laws and guidance; conducted a non-generalizable survey that received responses from 248 victims of terrorist attacks and their family members; collected data from DOD's website to analyze timeliness of court document postings; and interviewed relevant DOD officials and other government and non-government stakeholders.

GAO recommends that DOD identify and analyze the risks associated with potential options for expanding public access to proceedings, and develop a strategy, as appropriate, for how it will meet its public access goals with the expected increase in public interest. DOD concurred with the recommendation.