State and local governments or other transportation authorities who want project funding from the Department of Transportation used to face long journeys through multiple programs and offices.

A 2015 law sought to create a one-stop shop for applicants. It required DOT to consolidate key programs into one bureau—the Build America Bureau—and simplify the application process.

We found that the bureau has tried to streamline its application process but doesn't have a way to evaluate progress.

We recommended that the bureau assess its efforts to streamline the application process and find out what customers think. 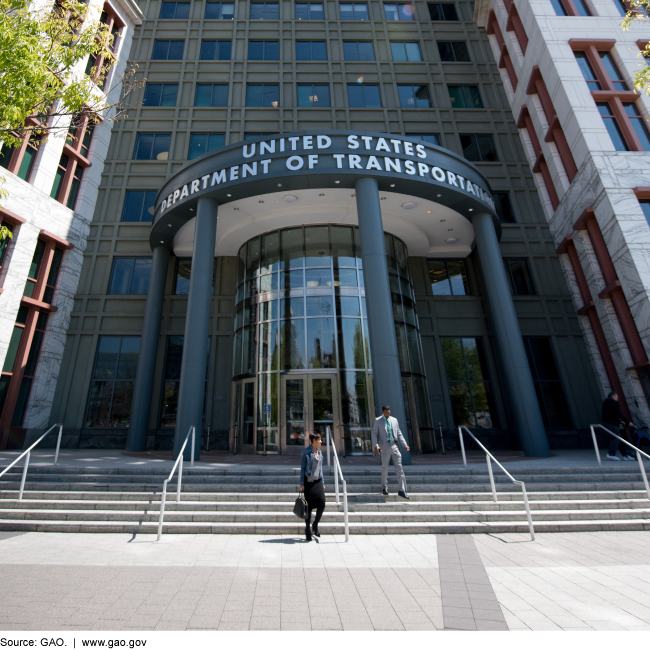 This photo shows the Department of Transportation headquarters building.

The Department of Transportation (DOT) has taken initial steps to establish the Build America Bureau's (Bureau) organizational structure and to create a process to help the Bureau carry out some of its responsibilities since it was created in 2016. However, the Bureau lacks a plan to guide its ongoing and future efforts. Initial steps included creating a consolidated process to evaluate applications for three financing programs: Transportation Infrastructure Finance and Innovation Act (TIFIA), Railroad Rehabilitation and Improvement Financing (RRIF), and Private Activity Bonds (PAB). DOT largely based this consolidated process on prior practices used for individual programs but also sought to improve and streamline the process. For example, DOT formed a decision-making body that meets more frequently than a predecessor group to quickly address issues and to decide when to advance projects through the process. However, progress has been more limited in implementing other responsibilities, such as promoting best practices for innovative financing. While some of the lack of progress can be attributed to factors such as changes in leadership and staff, the Bureau lacks a plan with implementation goals and a timeline to guide its ongoing and future efforts and also lacks performance indicators to assess its progress. Without these tools, the Bureau may face difficulties prioritizing work to carry out other responsibilities and maintaining momentum throughout continued implementation efforts and any future changes in leadership and staff.

While the Bureau has taken steps to improve and streamline the application evaluation process, it does not have a mechanism to assess how well the process works—including what is challenging and what works well. Project sponsors GAO interviewed had mixed views on the Bureau's application evaluation process and whether it was streamlined. Selected sponsors that applied for TIFIA and RRIF financing identified challenges with the process, including the length of the process and changes to requirements or terms for a loan. For example, sponsors said the Bureau took longer than it had estimated to procure external advisors to help conduct its evaluation of applications. According to the sponsors, such delays and uncertainty led to cost increases for two projects and construction delays for one project. Bureau officials noted that many factors outside the Bureau's control influence the length of the application evaluation process, such as changes to a project's scope and construction cost estimates. However, the Bureau has not taken steps, such as consistently soliciting feedback from sponsors, to assess how to further improve and streamline its process. Without taking such steps, the Bureau is missing an opportunity to further streamline the process and to ensure that any challenges do not discourage sponsors from seeking the Bureau's financing programs.

GAO found that the Bureau provided a clear rationale for decisions to advance or approve projects in the TIFIA and RRIF programs but did not do so for the PAB program. While DOT did document the decisions made in each step of the application evaluation process for the PAB program, the lack of a documented rationale to support these decisions leaves that program open to questions about the integrity of its process, as it is not immediately clear how the Bureau determined that an application satisfied requirements and what information was used to support decisions that advanced projects.

The FAST Act included a provision for GAO to review the Bureau. This report assesses, among other things, (1) progress DOT made to establish the Bureau and carry out its responsibilities, (2) the Bureau's process for evaluating applications, and (3) whether the Bureau provided a clear rationale for decisions in that process. GAO reviewed federal laws and Bureau documents and interviewed DOT officials and selected stakeholders, including 28 project sponsors selected so projects varied by mode, cost, and outcome.

GAO is making five recommendations, including that the Bureau develop a plan to guide its efforts and assess ways to further improve the application evaluation process. DOT concurred with two but did not fully concur with three of the recommendations and provided no rationale. GAO continues to believe the recommendations are valid as discussed in the report.