The State Trade Expansion Program seeks to help U.S. small businesses export their products to other countries. The Small Business Administration awards the program's funds to state trade offices, which assist with activities like trade show attendance. It has given about $139 million in grants since FY 2011.

The program requires states to provide matching funds—including a portion in cash—and SBA must follow rules designed to spread funding among states.

We made 4 recommendations, including that SBA:

Develop a process to ensure compliance with matching fund requirements 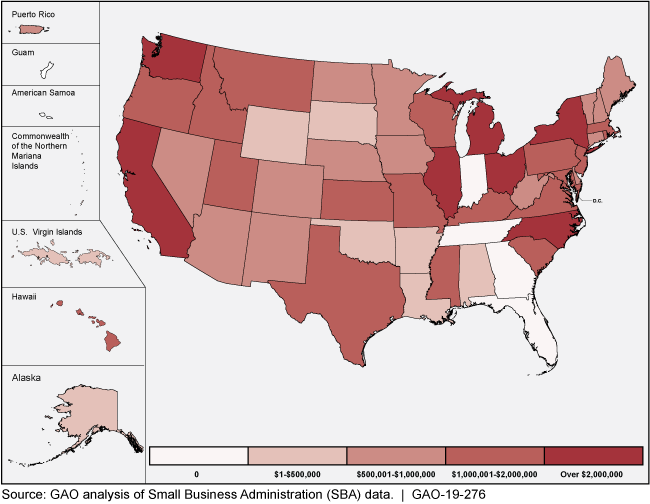 The Small Business Administration's (SBA) management of the State Trade Expansion Program (STEP) does not provide reasonable assurance of compliance with some legal requirements. Specifically, the Trade Facilitation and Trade Enforcement Act of 2015 (TFTEA) requirements for STEP include:

Proportional distribution requirement. SBA's Office of International Trade (OIT) must distribute grant funds so that the total amount awarded to the 10 states with the highest percentage of eligible small businesses does not exceed 40 percent of the program's appropriation that year.

Total match requirement. States must provide a 25 or 35 percent non-federal match to the federal grant amount.

GAO found that, while OIT has made changes to STEP in response to states' feedback, officials from states with low grant use described ongoing challenges with the program that affect their ability to fully use funds. These challenges include compressed application and award timelines, administrative burden, and poor communication. SBA has not adequately assessed risks to the program, including the risk to achieving program goals posed by some states' low grant fund use rates. Without such an assessment, OIT's ability to support U.S. exporters may be diminished. Further, SBA has not effectively facilitated sharing best practices among states. By doing this, SBA could help states make full use of funds to achieve the program's goals.

Congress established STEP in 2010 to increase small business exports. Through STEP, SBA has awarded about $139 million in grants to state trade offices, which in turn facilitate small business export activities, including participation in trade missions and attendance at trade shows. Congress reauthorized STEP in 2016. GAO was asked to review SBA's management of the program.

This report examines the extent to which (1) SBA's STEP grants management process provides reasonable assurance of compliance with selected requirements of applicable law, and (2) SBA has taken steps to address challenges states report in using grant funds to achieve program goals. GAO reviewed the program's authorizing legislation and federal and agency guidance on grants management, analyzed SBA program data, and interviewed SBA officials. GAO also conducted semi-structured interviews with a non-generalizable sample of 12 of the 40 states that received STEP grants in fiscal year 2015, the most recent year for which complete data were available. GAO selected these states on the basis of their low grant fund use rates.

GAO is recommending that SBA develop processes to ensure compliance with legal grant matching fund requirements, take steps to assess risks to program goals from low grant fund use rates, and enhance the sharing of best practices among states receiving the grant. SBA concurred with all of the recommendations.