TSA says that its screeners may refer passengers for additional screening if they exhibit behaviors that indicate stress, fear, or deception. Screeners are prohibited from picking passengers based on factors such as race or ethnicity.

TSA has guidance and checklists to monitor screeners’ use of behavior detection, but should better target unlawful profiling. 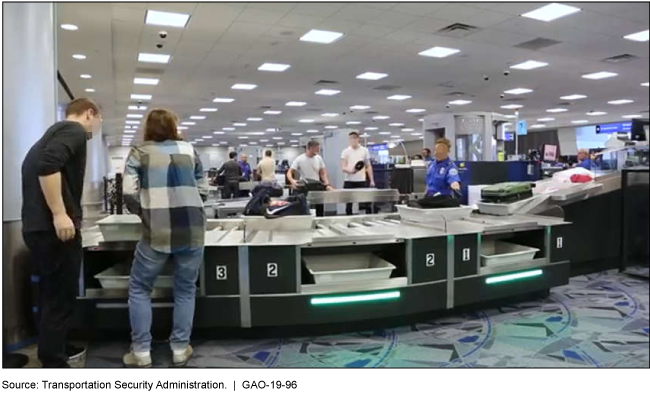 Transportation Security Administration (TSA) policy requires managers to ensure behavior detection is conducted without regard to race or ethnicity, among other factors. TSA uses seven oversight checklists to assess whether behavior detection activities are conducted in accordance with TSA policy, such as monitoring whether screeners trained in behavior detection observe and engage passengers correctly. However, these checklists do not instruct supervisors to monitor for indications of profiling. TSA officials stated that the training screeners receive, adherence to operating procedures, and general supervisory oversight are sufficient to alert supervisors to situations when unlawful profiling may occur. However, developing a specific mechanism to monitor behavior detection activities for compliance with policies prohibiting unlawful profiling would provide TSA with greater assurance that screeners are adhering to such policies.

From October 2015 through February 2018, TSA received about 3,700 complaints alleging civil rights and civil liberties violations related to passenger screening. These complaints are not specific to behavior detection activities. The TSA Contact Center (TCC), the office that initially receives these complaints, reported that about half of the complaints did not have complete information from passengers necessary for further review, such as the airport and date of the incident. According to TCC officials, they attempt to obtain the additional information from passengers, but often the complaint does not include the correct contact information or the passenger does not respond to the TCC's request for additional information. The TCC complaint data show that the remaining 51 percent (about 1,900) of complaints were referred to the TSA Multicultural Branch, the office responsible for reviewing complaints alleging civil rights and civil liberties violations. The Multicultural Branch reported reviewing 2,059 complaints, including approximately 1,900 complaints from TCC, as well as complaints referred from other TSA offices. For about half of the complaints (1,066) the Multicultural Branch reviewed, it found indications of potential discrimination and unprofessional conduct that involved race or other factors and recommended a range of refresher training across airports or for screeners at individual airports identified in the complaints.

a Training is recommended when screening procedures are not followed or as a proactive measure.

In 2016, TSA began using behavior detection in a more limited way to identify potentially high-risk passengers who exhibit certain behaviors it asserts are indicative of stress, fear, or deception, and refer them for additional screening or, when warranted, to law enforcement. TSA's policies and procedures prohibit unlawful profiling, i.e., screeners are prohibited from selecting passengers for additional screening based on race, ethnicity, or other factors. Allegations of racial profiling have raised questions about TSA's use of behavior detection.

GAO was asked to review TSA's measures to prevent behavior detection activities from resulting in unlawful profiling. This report examines, among other things, (1) TSA's oversight of behavior detection activities and (2) the number of complaints alleging violations of civil rights and civil liberties related to passenger screening and actions taken by TSA to address them.

GAO reviewed TSA policies and procedures; analyzed passenger complaint data received by TSA from October 2015 through February 2018 and actions taken to address them; and interviewed TSA officials. Complaint data we analyzed alleged conduct that occurred at the screening checkpoint and was not specific to behavior detection activities.