On a typical day, U.S. Customs and Border Protection screens more than 1 million people and $7.2 billion worth of cargo as they seek to enter the United States.

CBP has 2 programs that facilitate partnerships with public and private entities (such as local governments and companies) to help meet demand for its services. We continue to find that these programs are beneficial.

For example, one program allows CBP to accept donated land or funding, which can be used to expand inspection facilities.

In a previous report, we recommended evaluating the partnership programs. CBP expects to complete its assessment report in 2019.

This text has been updated to correct the value of cargo screened each day.

Public-private funding helped expand an entry to inspection lanes at a land port of entry in Cameron County, Texas 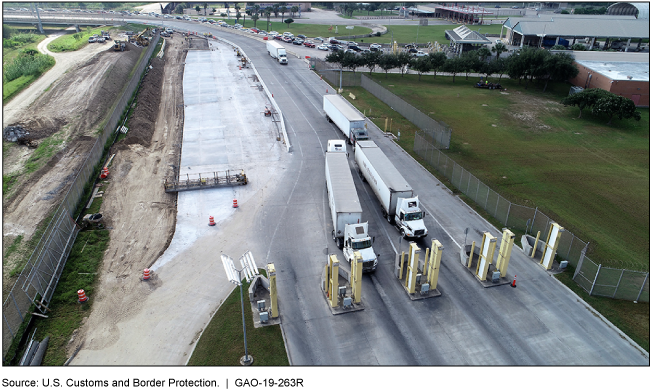 Inspection lane at a land port of entry in Cameron Country, Texas

Since our March 2018 report, U.S. Customs and Border Protection (CBP) continued to expand its public-private partnership programs—the Reimbursable Services Program (RSP) and Donations Acceptance Program (DAP). The RSP allows partners to reimburse CBP for providing services that exceed CBP's normal operations, such as paying overtime for CBP personnel that provide services at ports of entry outside normal business hours. The DAP enables partners to donate property or provide funding for port of entry infrastructure improvements. For example, from July 2017 through October 2018, CBP selected an additional 58 RSP applications, bringing the total number of RSP selections since 2013 to 172. In addition, CBP and its RSP partners established 36 new Memoranda of Understanding (MOU) as of December 2018 that outline how RSP agreements are implemented at specific ports of entry. Twenty-four of the 36 new MOUs pertain to providing CBP services at air ports of entry, such as freight or cargo processing, and traveler processing. Although the number of RSP selections increased, the number of CBP assignments and officer overtime hours provided through the RSP in 2018 was comparable to services provided in 2017. Regarding DAP, in fiscal year 2018, CBP entered into 17 new DAP agreements bringing the total number of agreements to 33 since fiscal year 2015. Partners span a variety of sectors, including state and local governments, and private companies, such as airlines. Donations served a variety of purposes, such as expanding inspection facility infrastructure, providing biometric detection services, and providing luggage for canine training. As of December 2018, CBP officials estimated that the total value of all DAP donations was $218 million.

In response to GAO's March 2018 recommendation, CBP developed the Alternative Funding Programs: Program Performance Management Plan, in April 2018, and plans to issue an assessment report in April 2019. GAO reviewed this plan and found that it contains program goals and metrics, along with methodologies to collect and analyze various qualitative and quantitative data. For example, RSP performance metrics span four overarching goals related to exploring new partnerships, facilitating existing partnerships, and measuring the benefits and effectiveness of the program. Similar goals are defined for the DAP. In addition, the plan lists a total of 27 measurable objectives and associated metrics for the RSP and DAP. CBP also surveyed RSP partners to gain insights on their experiences with the program and to identify potential areas for improvement and distributed an internal questionnaire to CBP officials at POEs. As of December 2018, CBP reported that it had completed data collection as called for in the plan, and was analyzing results. CBP expects to issue internally an assessment report for the RSP and DAP based on this analysis in April 2019, and then on an annual basis. To fully address GAO's March 2018 recommendation, CBP should complete and issue its planned assessment report.

On a typical day in fiscal year 2017, CBP officers inspected over 1 million passengers and pedestrians and over 78,000 truck, rail, and sea containers worth approximately $7.2 billion at 328 U.S. land, sea, and air ports of entry, according to CBP. To help meet demand for these types of CBP services, since 2013, CBP has entered into public-private partnerships under RSP and DAP. The RSP allows partners to reimburse CBP for providing services that exceed CBP's normal operations, such as paying overtime for CBP personnel that provide services at ports of entry outside normal business hours. The DAP enables partners to donate property or provide funding for port of entry infrastructure improvements.

The Cross-Border Trade Enhancement Act of 2016 included a provision for GAO to annually review the agreements and funds and donations that CBP and GSA have received under the RSP and DAP. GAO issued the first annual report in March 2018, and found that the partnerships have benefits, but that CBP could benefit from establishing an evaluation plan to assess overall program performance. Thus, GAO recommended that CBP develop and implement an evaluation plan to assess the overall performance of RSP and DAP. CBP concurred with this recommendation.

This second annual report updates key information from the March 2018 report, and examines: (1) the status of CBP public-private partnership program agreements, including the purposes for which CBP has used the funds and donations from these agreements in 2017 and 2018; and (2) the extent that CBP addressed GAO's March 2018 recommendation to develop and implement an evaluation plan to assess the overall performance of public-private partnership programs. GAO reviewed partnership agreements and data on program usage. GAO also reviewed CBP's 2018 Alternative Funding Programs: Program Performance Management Plan, and interviewed CBP officials.