In 2017, Hurricanes Irma and Maria caused extensive damage throughout Puerto Rico, destroying roads and buildings and cutting power and communication lines. Puerto Rico estimates that $132 billion will be needed to repair and reconstruct its infrastructure and services.

FEMA has provided nearly $4 billion in public assistance grant funding to Puerto Rico as of September 2018, mostly for emergency work like debris removal. However, applicants in Puerto Rico have reported encountering challenges in applying for funding of more permanent projects (like repairs to roads)—including unclear guidance on how to properly apply for these funds.

Damages to a Dock at the Port of Ponce, Puerto Rico, September 2018 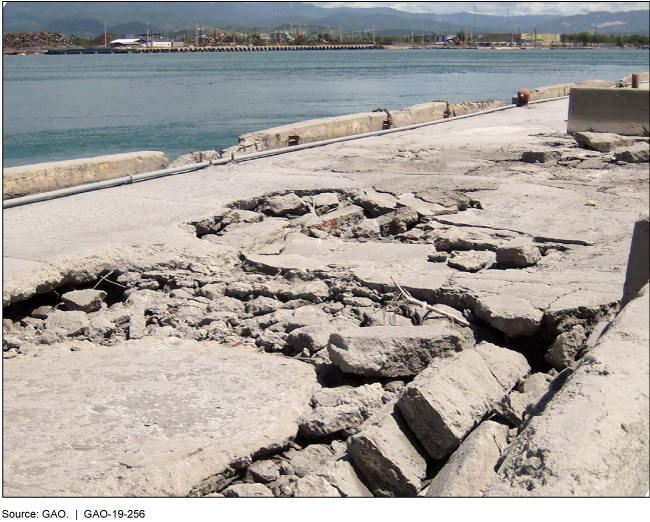 Crumbling pavement by the water.

For the Spanish translation of the highlights page for this document, see GAO-19-331.

The Federal Emergency Management Agency (FEMA) obligated almost $4 billion in Public Assistance grant funding to Puerto Rico as of September 30, 2018 in response to the 2017 hurricanes. FEMA obligated about $3.63 billion for emergency work—emergency measures such as debris removal and generators—and about $151 million for permanent work to repair and replace public infrastructure such as roads (see figure).

FEMA officials stated that the agency is taking actions to address reported recovery challenges, such as leveraging existing expertise to train personnel and developing supplemental guidance on alternative procedures and reducing delays in reimbursements. GAO will continue to monitor these issues and plans to report additional findings and recommendations as appropriate later this year.

In 2017 two major hurricanes – Irma and Maria – caused extensive damage throughout Puerto Rico. Hurricane Maria, a Category 4 hurricane, was the most intense hurricane to make landfall in Puerto Rico since 1928, destroying roads, buildings, and cutting power and communication lines, among other things. Puerto Rico estimates that $132 billion will be needed to repair and reconstruct infrastructure and services. FEMA—a component of the Department of Homeland Security (DHS)—is the lead federal agency responsible for assisting Puerto Rico as it recovers. FEMA administers the Public Assistance program in partnership with Puerto Rico to provide funds to rebuild damaged infrastructure and restore critically-needed services.

GAO is not making recommendations at this time, but will continue monitoring the recovery as part of its ongoing work.