Americans rely on the Global Positioning System daily. The Defense Department is working to upgrade the systems that make up GPS, including completing a critical new ground control system known as OCX.

We found that the OCX upgrade—already delayed approximately 5 years—will likely be delayed further. At least 2 years of work remain. The OCX contractor has already used most of the extra time built into its schedule, leaving little room to fix any problems that may arise.

We recommended an independent assessment of the OCX schedule, which would allow the Defense Department and Congress to better plan how to deal with potential delays.

The OCX system will control GPS satellites from the ground 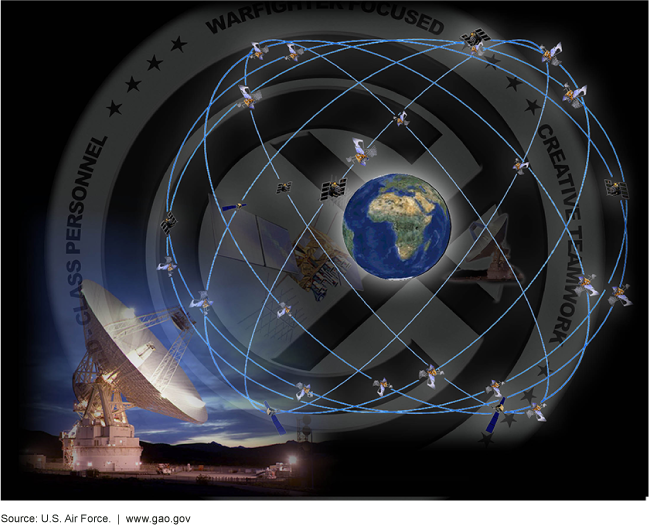 Conceptual illustration of OCX system, including a satellite dish, the earth, and orbiting satellites.

The Global Positioning System's (GPS) next generation operational control system's (OCX) program schedule continues to be optimistic and, with significant development remaining, more delays are likely for delivery, acceptance, and operation. See the figure below for previous delays, cost growth, and the current baseline. 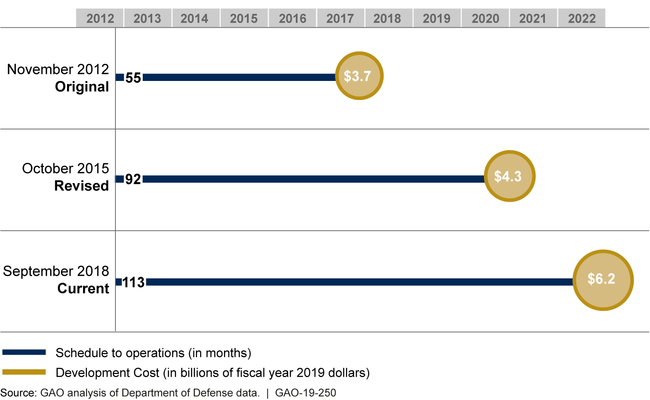 Completing the full OCX program schedule requires (1) timely delivery by the contractor and acceptance by the Air Force and (2) an efficient completion of a planned 7-month government-run post-acceptance developmental testing. GAO found that there is potential for significant delays on both fronts. While there has been some improvement to the pace of software development, the rollout of the new development methodology has been delayed to a point where most of the contractor's schedule reserve has been used. Assumed improvements in how long it takes to repair software defects has not occurred as planned, placing additional pressure on the contractor's delivery date. Additionally, Air Force officials have acknowledged that the government developmental test period after acceptance could double in duration and delay operations further because of concurrency, test plan uncertainty, and risks of late discovery of problems.

With approximately 2 years of work remaining before delivery, there is no plan to have the full schedule independently assessed. For complex programs, such as OCX, best practices state an independent view is necessary and that a periodic schedule assessment should be performed as progress is made and risks change. Such an assessment would help inform congressional and DOD decision makers as they consider what steps may be taken to address delays to the start of OCX operations and ensure the investments in needed new receivers are properly aligned.

The U.S. military and the public depend daily on GPS data. OCX, the ground system that will command and control next generation GPS satellites, is one of several interdependent systems the Air Force is developing to modernize GPS. OCX has been hampered by delays and $2.5 billion in cost growth since the program started in 2012. The Air Force set a new baseline for cost and schedule in 2018 after OCX breached its cost threshold in 2016.

The National Defense Authorization Act for Fiscal Year 2016 contained a provision that the Air Force provide quarterly reports to GAO on the next generation GPS acquisition programs, and a provision that GAO brief the defense committees as needed. GAO provided numerous briefings from 2016 through 2018 and issued reports in 2016 and 2017. Continuing this body of work, this report focuses on the extent to which schedule risks may affect OCX delivery, acceptance, and approval for operation.