Did you know that, when you buy an airline ticket, the ticket can include a fee to help airports build new facilities and fund other capital development projects?

However, technology—like mobile apps—could allow airports to collect the fee in other ways. We looked at legal, passenger experience, and other factors to consider when deciding whether to change how the fee is collected. 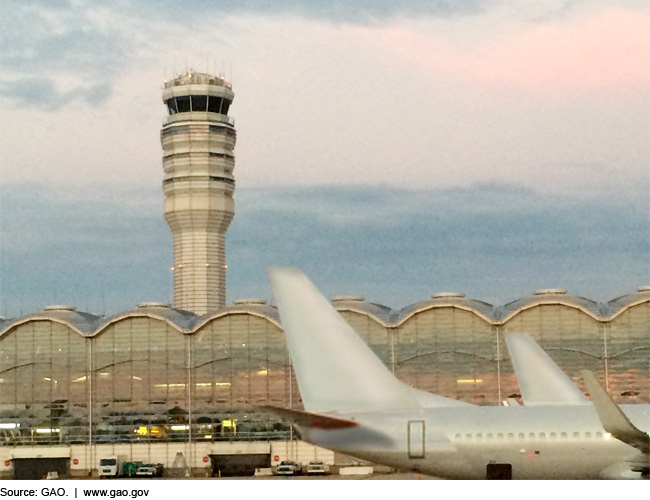 Photo of airplanes at an airport

In the United States, commercial service airports may impose Passenger Facility Charges (PFC) on passengers to help pay for airport capital projects. Airlines are required to collect these fees as part of a ticket’s purchase and remit them to airports. However, other methods not linked to the airline ticket could be used to collect PFCs. The non-ticket based methods that could be used to collect PFCs and that GAO identified in prior work have not substantively changed, according to interviews with aviation stakeholders and reviews of industry, government, and academic publications. These methods include: (1) Internet-based systems such as websites and mobile phone apps; (2) self-service kiosks that could be adapted to collect multiple forms of payment; and (3) payment counters where customer service representatives could collect payments from passengers. The stakeholders GAO spoke with and GAO’s research did not identify any technological advances that would create new methods of fee collection or substantially alter the methods on which GAO had previously reported.

Few airports in other countries are known to use non-ticket-based methods to collect fees from passengers. By consulting aviation associations and websites, GAO identified seven airports located in the Caribbean, South America, Southeast Asia, and Western Europe that collect fees directly from passengers, using payment counters, kiosks, online payments, or a combination of kiosk and online payment. According to officials of an international aviation association, airports that use payment counters to collect passenger fees tend to be small airports in developing countries that use this method to have immediate access to funds. One of the airports GAO identified is now transitioning from non-ticket-based to ticket-based collection to conform to the method used by most other airports and to improve passenger experience by eliminating the extra step. Neither the stakeholders GAO spoke with nor GAO’s research identified any airports that are transitioning away from the ticket-based fee collection method.

Since 1992, PFCs have been collected from airline passengers as part of the ticket’s purchase to help U.S. commercial service airports pay for projects such as construction or improvement of runways and terminals. Airlines remit the collected PFCs to participating airports, as approved by the Federal Aviation Administration (FAA). By law, PFCs cannot exceed $4.50 per flight segment, for a maximum of two charges on a one-way trip or four charges on a round trip. In 2017, about $3.3 billion in PFCs was collected.

GAO’s prior reports identified three basic alternative methods that could be used to collect PFCs: kiosk or counter, Internet or online payment, or emerging technologies, noting that the alternatives were not mutually exclusive. GAO’s prior work also identified factors to be considered in any proposal to change the ticket-based collection method currently used in the United States. GAO was asked to provide an update on alternative methods to the ticket-based fee collection method, given advances in technology and increasing consumer adoption.

To address these objectives, GAO reviewed prior GAO reports; industry, government, and academic publications; and FAA documents. GAO interviewed FAA officials and aviation stakeholders who have roles in PFC collection and whom GAO interviewed for its prior work, including representatives of airport and airline associations, consumer groups, and the aviation technology sector, for their updated assessment on alternative PFC collection methods, their use world-wide, and factors to consider in the implementation of these methods. GAO searched literature and airport websites to identify examples of non-U.S. airports that use non-ticket-based methods to collect passenger fees; the identified airports are those that GAO was able to contact directly to confirm their method to collect passenger fees. GAO also reviewed government data on Americans’ use of Internet and mobile technology.