This report takes a look at one of the first steps in the sales process—when a government asks about the price and availability of equipment or a service.

From 2014 to 2018, DOD received about 3,000 such requests. Among other things, we looked at the timeliness of DOD's response process. In 5 cases we examined, responses took from 45 to 320 days. Sometimes responses can involve many contractors and DOD offices.

From fiscal years 2014 to 2018, DOD received approximately 3,000 requests from 93 countries on the price and availability of U.S. weapons and services 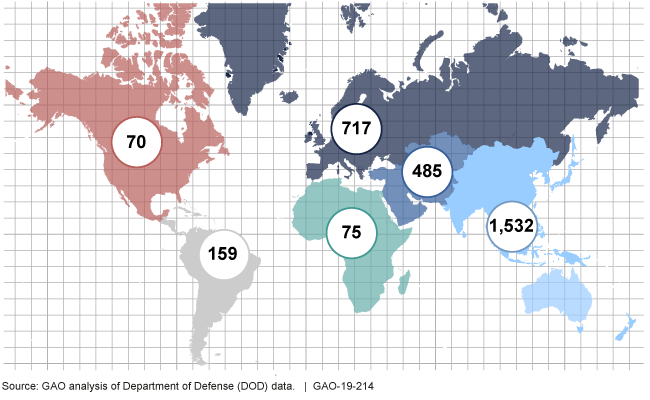 Map showing the request totals by region. The highest number came from Asia. Europe was second. The Middle East was third.

The Department of Defense (DOD) reported receiving 3,038 requests for Foreign Military Sales (FMS) price and availability data in fiscal years 2014 through 2018 from 93 countries across six geographic regions, as shown in the figure. Foreign customer requests included services and items such as training and support services for weapon systems, missiles, aircraft, and communication equipment.

Not all countries in each region submitted a price and availability request. 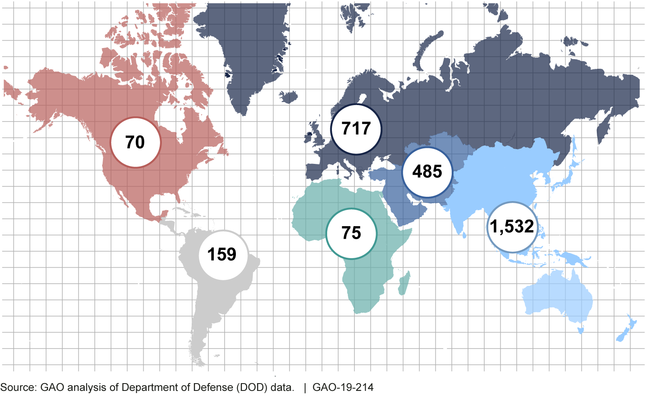 DOD officials indicated they generally strove to offer price and availability data that reflected rough order of magnitude estimates of total anticipated costs for a complete and sustainable capability. Contractors often provide input to DOD for these cost and schedule estimates. In the five examples GAO reviewed, DOD officials considered factors such as possible production delays and included anticipated costs for support services, operations, and sustainment, when needed. DOD officials also included FMS administrative charges and, as applicable, nonrecurring and transportation costs. GAO found that when DOD considered these factors in developing the response to the customer, at times, they made adjustments to the estimates provided by contractors to more fully reflect expected costs if the items are purchased.

Among the five examples, GAO found that response times ranged from 45 to 320 days and that a number of factors can affect timeliness. For example, the complexity of the system or capability the customer is interested in acquiring may require involvement from multiple program offices and defense contractors, requiring more time than the 45 days suggested by DOD's guidance.

DOD manages the procurement of billions of dollars in defense items and services on behalf of foreign customers through the FMS program. These sales help support the defense industrial base and are vital to U.S. foreign policy and national security interests.

The FMS process generally begins with a request by a foreign government for information about a U.S. defense item or service. Requests for price and availability data are an optional step in the process. DOD guidance is to generally respond to such requests within 45 days.

GAO analyzed DOD price and availability data for fiscal years 2014 through 2018, the latest data available; and reviewed documents for a non-generalizable sample of five price and availability responses—varying by estimate value—provided to foreign customers by the Army, Navy, and Air Force. GAO also interviewed defense contractors and DOD officials.

GAO is not making any recommendations at this time.