We identified more ways to separate these funds: 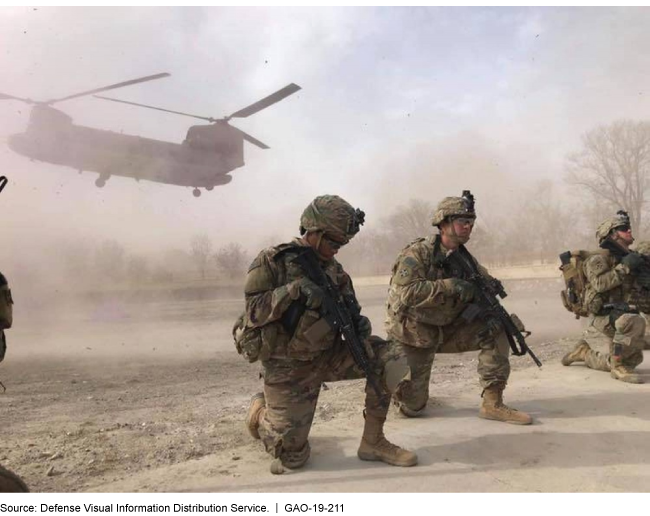 Photo of three soldiers kneeling and a helicopter in the background.

Selected Department of Defense (DOD) components use coding and other internal control activities to separately account for overseas contingency operations (OCO) and base amounts in their operation and maintenance (O&M) accounts during budget execution. To record and track OCO and base amounts separately, the military services, U.S. Special Operations Command, and the Defense Security Cooperation Agency use coding in their financial systems. These DOD components also have instituted some internal control activities to help ensure separation of OCO amounts. For example, Army and Defense Security Cooperation Agency officials stated that the financial systems they use incorporate system controls that automatically maintain the categories of funding, such as OCO, designated during allotment through subsequent actions to ensure the OCO coding remains throughout budget execution.

GAO identified at least four alternatives to the processes used to separate funding for DOD's OCO and base activities:

Move enduring costs to the base budget. DOD could request funding for enduring costs—costs that would continue in the absence of contingency operations—through its base budget rather than its OCO budget.

Use specific purpose language. Congress could use legally binding language in the annual DOD appropriations acts to specify the purposes—programs, projects and activities—for which OCO amounts may be obligated.

Implementing these alternatives would require Congress and DOD to take action in different phases of the budget process (see figure).

Each alternative includes tradeoffs that Congress and DOD would have to consider to strike the desired balance between agency flexibility and congressional control. The alternatives, and GAO's summary of their positive and negative aspects identified by questionnaire respondents, could be a reference for Congress and DOD as they consider potential changes to processes for separating the funding of amounts for OCO and base activities.

Since 2001, DOD has received more than $1.8 trillion in OCO funds. DOD defines “contingency operations” as small, medium, or large-scale military operations, while “base” activities include operating support for installations, civilian pay, and other costs that would be incurred, regardless of contingency operations. Congress separately appropriates amounts for base and OCO activities into the same appropriation accounts and directs how funds are to be spent by designating amounts in conference reports or explanatory statements accompanying the annual appropriations acts.

The National Defense Authorization Act for Fiscal Year 2018 included a provision for GAO to report on the feasibility of separating OCO expenditures from other DOD expenditures. This report (1) describes internal controls that selected DOD components use to separately account for OCO and base amounts during budget execution and (2) identifies and examines alternatives that Congress or DOD could use to separate funding for OCO and base activities.

GAO reviewed documentation of DOD internal controls for separating OCO and base amounts in the O&M account, interviewed financial management officials, and, among other things, conducted a literature review to identify alternatives that Congress or DOD could use to separate funding for OCO and base activities. Also, GAO administered a questionnaire to DOD and non-DOD officials to identify positive and negative aspects of these alternatives.