DOD relies on a mix of government personnel and contractors to carry out its multi-billion dollar major acquisition programs for new ships, planes, and more.

We reviewed, among other things, the number and type of personnel working at 11 major programs. DOD does not specify one way for structuring programs and they varied widely. Programs:

Generally had more personnel, especially in engineering, if they were developing key technologies for their projects

A B-2 flies through a thunderstorm; the B-2 Defensive Management System-Modernization was one of the programs we examined. 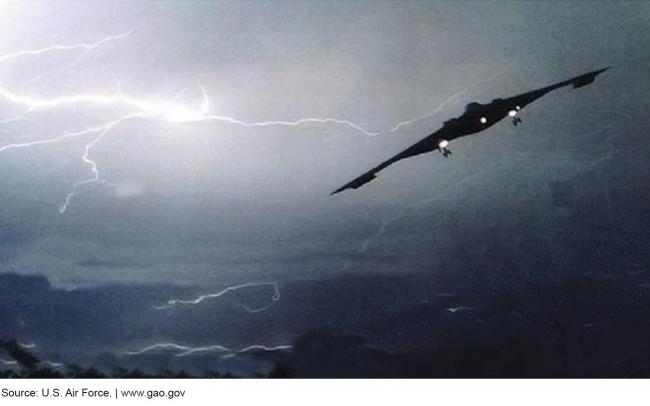 Photo of a B-2 bomber flying in stormy skies.

The workforce size, composition, and mix, as well as the organizational structure of the 11 Department of Defense (DOD) major defense acquisition programs GAO reviewed were influenced by several interrelated factors. These factors include the government's role in developing and integrating key technologies, the availability of government personnel to provide the skills needed, and whether the program was managed as part of a portfolio of related programs or as a stand-alone program. For example, programs that assumed more responsibility for developing and integrating key technologies generally had a larger workforce, which was primarily composed of engineering and technical personnel. Program officials GAO met with stated that they generally prefer to use government personnel, but use contractor support when the number of government personnel allocated to the program is not sufficient to meet their needs, the technical skills are not available or are limited within the government, or to fulfill short-term tasks that are too brief to justify hiring government personnel. GAO also found that DOD structured the 11 programs to allow them to leverage available personnel with the necessary skills. Two programs were structured as standalone programs because they were new, high priority, and complex. The other nine programs were managed as a part of a portfolio of related programs. For example, the Air Force's F-15 program office manages a number of programs that add capabilities to the existing system.

DOD's Financial Management Regulation, which governs the formulation and presentation of DOD's budget request, gives DOD flexibility in how it submits program personnel costs. Consequently, the personnel costs for the 11 programs GAO reviewed were not separately and distinctly identified from other costs. For example, costs for civilian and military personnel are often centrally funded through appropriations categories that support many DOD activities and do not provide information on specific program personnel costs. GAO also found that costs for contractor support are often combined with other costs in individual program budget exhibits.

In 2018, DOD estimated that its 82 major defense acquisition programs would cost over $1.69 trillion in total to acquire. DOD relies on program offices—composed of civilian, military and contractor support personnel—to manage and oversee these technically complex programs.

GAO was asked to review factors affecting DOD's personnel needs for its acquisition programs and how DOD budgets for the costs associated with these personnel.

This report describes (1) factors affecting the workforce size, composition, and mix of contractor and government personnel, as well as organizational structure for selected programs; and (2) how personnel costs associated with those selected programs are included in DOD's budget justification documents.

GAO reviewed DOD acquisition, workforce, and financial management policies and regulations and identified a non-generalizable sample of 11 major defense acquisition programs, including programs from each military department that were recently approved to enter into system development. GAO requested information from each of these programs to identify the number and type of personnel supporting the program, reviewed program documentation, and interviewed program officials. GAO also reviewed DOD's budget justification documents for fiscal years 2018 and 2019.