Like anyone who owns a computer or smartphone, the Department of Defense has to continually update the software that keeps its weapon systems running smoothly. Sustaining that software for systems including aircraft, ships, submarines, and missiles, is essential for national defense.

The cost of sustaining DOD's weapon system software is estimated to be at least $15 billion over the next 5 years, but DOD may not know the full costs. Some of DOD's systems have incomplete cost data, which could make it harder to ensure that DOD has the necessary resources available.

We made 5 recommendations to help DOD address cost and data challenges.

A U.S. Military Servicemember Using a Computer on a Reconnaissance Vehicle 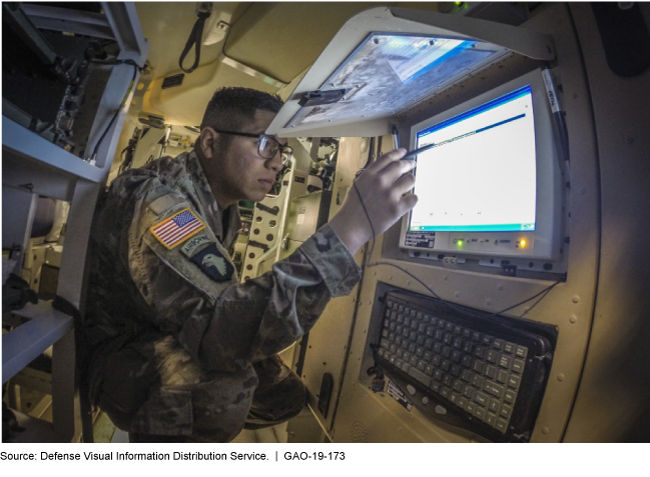 Photograph of a man in a military uniform using a computer that is mounted on the wall of a small space.

The Department of Defense (DOD) has policies and organizations to manage the sustainment of operational system software. DOD policy defines software sustainment and software maintenance activities synonymously, to comprise any activities or actions that change the software baseline, as well as modifications or upgrades that add capability or functionality. One example of such an action is the Air Force's modifying the security software on the B-52 bomber to better protect against attempted system penetration. The figure below defines the four categories of software sustainment actions.

DOD's ability to track weapon system software sustainment costs is impeded by limitations in its collection of software cost data. First, GAO found that the Office of Cost Assessment and Program Evaluation's (CAPE) Cost and Software Data Reporting system did not collect weapon system cost data from DOD software centers. Recognizing this, CAPE directed in January 2017 that cost and software data efforts on major acquisition programs should begin to be collected from government organizations, including DOD software centers. However, CAPE acknowledges that it lacks an implementation plan to execute and monitor the requirement for these centers to submit cost and software data. Second, GAO also found that the military departments' operating and support cost systems have incomplete software sustainment cost data. DOD policy requires the military departments to collect and maintain actual operating and support costs, including software sustainment costs. Without CAPE's taking steps to prioritize obtaining complete information on operating and support costs for software sustainment, CAPE is challenged in its ability to accurately compile total program costs or provide reliable life-cycle cost estimates to DOD and Congress.

Software is integral to the operation and functionality of DOD equipment, platforms, and weapon systems, including tactical and combat vehicles, aircraft, ships, submarines, and strategic missiles. DOD estimates that software sustainment funding will total at least $15 billion over the next 5 fiscal years. DOD carries out software sustainment at various locations, where DOD uses its maintenance capabilities to maintain, overhaul, and repair its military weapon systems.

GAO is making five recommendations, including that (1) the Navy categorize and report its software sustainment costs in accordance with DOD policy; and (2) CAPE improve the collection of weapon system software cost data. DOD concurred with GAO's recommendations.