The law requires federal agencies to buy domestic products. But federal agencies can buy foreign products sometimes, e.g., when domestic items are not available at a reasonable cost or when international trade agreements waive the Buy American Act restrictions.

According to the federal procurement database, foreign products comprised less than 5% of what the government bought in fiscal year 2017. The real amount could be higher than that, in part, because of data errors. For example, some agencies had inaccurately recorded waiver information.

We recommended ways to improve reporting and compliance with the act. 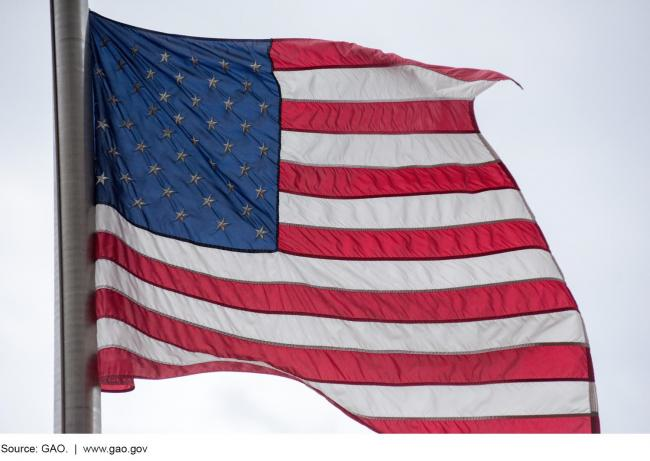 According to data reported in the Federal Procurement Data System-Next Generation (FPDS-NG) in fiscal year 2017, foreign end products accounted for less than 5 percent—about $7.8 billion—of federal obligations for products potentially subject to the Buy American Act. Federal agencies procured foreign products using exceptions to Buy American Act requirements, as well as through waivers or when the Buy American Act did not apply, as shown in the figure. 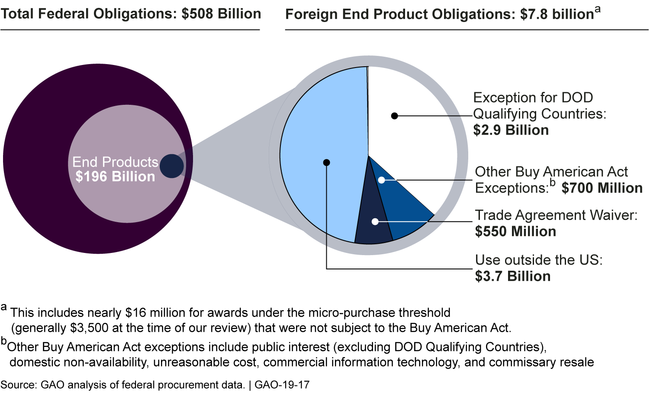 The amount of foreign end products purchased could be greater than reported in FPDS-NG, however, due to reporting errors and system limitations. GAO found that 6 of the 38 contracts reviewed from the Departments of Defense (DOD), Health and Human Services (HHS), Homeland Security (DHS), and Veterans Affairs (VA) inaccurately recorded waiver or exception information. FPDS-NG system limitations compound these errors because it does not fully capture Buy American Act data. Among other things, the database does not always enable agencies to report the use of exceptions or waivers on contracts for both foreign and domestic products, reducing data accuracy. The Office of Management and Budget (OMB) is considering strategies to improve Buy American Act data.

The four agencies GAO reviewed varied in their approaches to Buy American Act training and guidance. DOD reports that it will have trained more than 18,000 personnel by the end of 2018. DHS reports training almost 1,400 people—approximately 94 percent of its contracting staff—as of April 2018. Some VA courses mention the Act, but none is focused specifically on implementing its requirements. HHS does not have agency-level training or guidance on the Act. GAO found that contracting officers for the contracts it reviewed face challenges implementing Buy American Act requirements. Having specific and targeted Buy American Act guidance and training can better ensure that agencies meet the Act's requirements.

The Buy American Act of 1933, as amended, is the main U.S. law promoting domestic purchasing. The Act permits agencies to buy foreign end products only under certain exceptions, such as when domestic items are not available at a reasonable cost. Further, U.S. trade agreements waive the Buy American restrictions for certain products.

GAO was asked to review implementation of the Buy American Act. This report assesses the extent to which (1) the federal government procures foreign products through Buy American Act exceptions and waivers; and (2) selected agencies provide training and guidance to implement the Act.

GAO reviewed laws, regulations, and policies related to the Buy American Act and analyzed data for fiscal year 2017 from FPDS-NG. GAO also analyzed a non-generalizable sample of 38 contracts from DOD, HHS, DHS, and VA—the agencies with the most obligations for products in fiscal year 2017. The 38 awards selected include a mix of foreign and domestic products, as well as dollars obligated. Finally, GAO interviewed cognizant contracting and policy officials from the selected agencies.

GAO is recommending that OMB take steps to improve Buy American Act data and that HHS, DHS, and VA improve agency guidance and training on implementing the Act. All of the agencies either concurred or generally concurred with GAO's recommendations.