FEMA awarded more than $22 billion in grants for four major disasters in 2017 alone. It manages these and other grants in numerous, disparate information technology systems that it has been attempting to modernize.

We reviewed FEMA's Grants Management Modernization program. Among other things, we found

Its schedule is not realistic

We made 8 recommendations, including that FEMA improve its schedule. 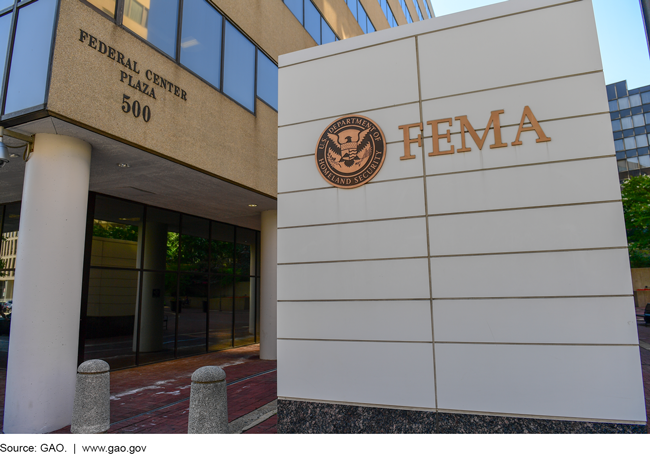 A photo of FEMA headquarters

Until FEMA fully implements the remaining two practices, it risks delivering an IT solution that does not fully modernize FEMA's grants management systems.

While GMM's initial May 2017 cost estimate of about $251 million was generally consistent with leading practices for a reliable, high-quality estimate, it no longer reflects current assumptions about the program. FEMA officials stated in December 2018 that they had completed a revised cost estimate, but it was undergoing departmental approval. GMM's program schedule was inconsistent with leading practices; of particular concern was that the program's final delivery date of September 2020 was not informed by a realistic assessment of GMM development activities, and rather was determined by imposing an unsubstantiated delivery date. Developing sound cost and schedule estimates is necessary to ensure that FEMA has a clear understanding of program risks.

Of five key cybersecurity practices, FEMA fully addressed three and partially addressed two for GMM. Specifically, it categorized GMM's system based on security risk, selected and implemented security controls, and monitored security controls on an ongoing basis. However, the program had not initially established corrective action plans for 13 medium- and low-risk vulnerabilities. This conflicts with the Department of Homeland Security's (DHS) guidance that specifies that corrective action plans must be developed for every weakness identified. Until FEMA, among other things, ensures that the program consistently follows the department's guidance on preparing corrective action plans for all security vulnerabilities, GMM's system will remain at increased risk of exploits.

FEMA, a component of DHS, annually awards billions of dollars in grants to help communities prepare for, mitigate the effects of, and recover from major disasters. However, FEMA's complex IT environment supporting grants management consists of many disparate systems. In 2008, the agency attempted to modernize these systems but experienced significant challenges. In 2015, FEMA initiated a new endeavor (the GMM program) aimed at streamlining and modernizing the grants management IT environment.

GAO was asked to review the GMM program. GAO's objectives were to (1) determine the extent to which FEMA is implementing leading practices for reengineering its grants management processes and incorporating needs into IT requirements; (2) assess the reliability of the program's estimated costs and schedule; and (3) determine the extent to which FEMA is addressing key cybersecurity practices. GAO compared program documentation to leading practices for process reengineering and requirements management, cost and schedule estimation, and cybersecurity risk management, as established by the Software Engineering Institute, National Institute of Standards and Technology, and GAO.