Developing software for DOD space systems, like GPS, has historically taken longer and cost billions of dollars more than planned.

We looked at four software-intensive DOD space systems that had cost growth or delays.

While DOD has started using better software development approaches, we found some challenges to making them work. For example, program offices and system developers don't consistently involve the systems' end users in development, making it hard to ensure that the systems will meet their needs.

We recommended DOD provide specific direction on when and how often to involve users, and document the involvement to ensure it happens. 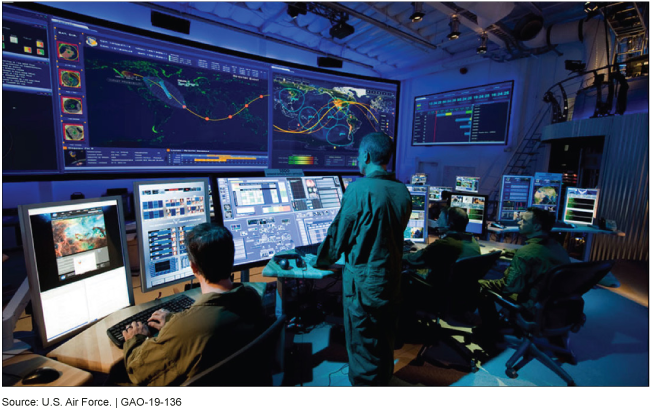 Military personnel looking at a bank of large monitors in a dimly lit room.

The four major Department of Defense (DOD) software-intensive space programs that GAO reviewed struggled to effectively engage system users. These programs are the Air Force's Joint Space Operations Center Mission System Increment 2 (JMS), Next Generation Operational Control System (OCX), Space-Based Infrared System (SBIRS); and the Navy's Mobile User Objective System (MUOS). These ongoing programs are estimated to cost billions of dollars, have experienced overruns of up to three times originally estimated cost, and have been in development for periods ranging from 5 to over 20 years. Previous GAO reports, as well as DOD and industry studies, have found that user involvement is critical to the success of any software development effort. For example, GAO previously reported that obtaining frequent feedback is linked to reducing risk, improving customer commitment, and improving technical staff motivation. However, the programs GAO reviewed often did not demonstrate characteristics of effective user engagement that are identified in DOD policy and statute:

As reflected above, actual program efforts to involve users and obtain and incorporate feedback were often unsuccessful. This was due, in part, to the lack of specific guidance on user involvement and feedback. Although DOD policies state that users should be involved and provide feedback on software development projects, they do not provide specific guidance on the timing, frequency, and documentation of such efforts. Without obtaining user feedback and acceptance, programs risk delivering systems that do not meet users' needs. In selected instances, the lack of user involvement has contributed to systems that were later found to be operationally unsuitable.

The programs GAO reviewed also faced software-specific challenges in using commercial software, applying outdated software tools, and having limited knowledge and training in newer software development techniques. For example, programs using commercial software often underestimated the effort required to integrate such software into an overall system. Secondly, selected programs relied on obsolete software tools that they were accustomed to using but which industry had since replaced. Finally, GAO found that two of the reviewed programs lacked knowledge of more modern software development approaches. DOD has acknowledged these challenges and has efforts underway to address each of them.

Over the next 5 years, DOD plans to spend over $65 billion on its space system acquisitions portfolio, including many systems that rely on software for key capabilities. However, software-intensive space systems have had a history of significant schedule delays and billions of dollars in cost growth.

Senate and House reports accompanying the National Defense Authorization Act for Fiscal Year 2017 contained provisions for GAO to review challenges in software-intensive DOD space programs. This report addresses, among other things, (1) the extent to which these programs have involved users; and (2) what software-specific management challenges, if any, programs faced.

GAO is making two recommendations that DOD ensure its guidance that addresses software development provides specific, required direction on the timing, frequency, and documentation of user involvement and feedback. DOD concurred with the recommendations.