To keep its technological edge, the Army has started to modernize its equipment, such as long-range precision weapons and next-generation combat vehicles. It created the Army Futures Command to improve the process.

Historically, the Army has struggled to get new equipment on time and on budget. While the Army is following many of our leading practices, one exception is that it intends to move new technologies into weapons systems before testing in a realistic environment. Moving forward without this testing can delay delivery and increase costs as development continues.

We made recommendations to help the Army realize its modernization goals. 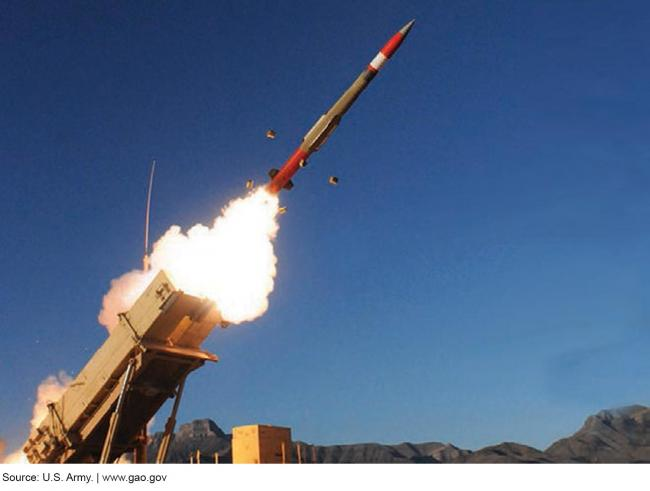 Since 2017, when the Army announced its initiative to update its forces and equipment with improved capabilities—known as modernization—it has

prioritized six broad areas of capability needs as shown in the table below;

established and assigned eight cross-functional teams to pilot how to address these needs;

established the Army Futures Command as the focal point for modernization efforts, with a four-star general to oversee it; and

realigned over $1 billion in science and technology funding to support modernization efforts within the $7.5 billion expected to be spent over the next 5 years.

Under the modernization effort, the Army plans to begin weapon systems development at a lower level of maturity than what is recommended by leading practices. GAO has raised concerns about this type of practice for almost two decades for other Army acquisitions, because proceeding into weapon systems development at earlier stages of technology maturity raises the risk that the resulting systems could experience cost increases, delivery delays, or failure to deliver desired capabilities. Taking this approach for acquisitions under the modernization effort raises similar concerns for the Army's six prioritized capability needs.

The Army has not developed a plan for capturing the lessons learned from the cross-functional team pilots, and therefore may miss an opportunity to leverage the experience of these teams in applying leading practices.

In order for the Army to maintain its technological edge over potential adversaries, it plans to invest in near- and long-term modernization efforts. However, the Army has struggled with modernization initiatives in the past. For example, the Future Combat System was canceled after a cost of $21 billion and delivery of few new capabilities.

The National Defense Authorization Act for Fiscal Year 2018 included a provision for GAO to report on the Army's modernization strategy. This report assesses (1) the status of the Army's near- and long-term modernization efforts; and (2) the extent to which the Army has applied leading practices to these efforts. GAO reviewed Army directives, procedures, and policies; and compared the Army's efforts with leading practices for requirements and technology development, effective cross-functional teams, and mergers and organizational transformations.

GAO is making four recommendations, including that the Army follow leading practices for maturing technologies to a higher level than currently planned and develop a plan to capture lessons learned from the cross-functional teams. DOD concurred with all the recommendations.