In recent cybersecurity tests of major weapon systems DOD is developing, testers playing the role of adversary were able to take control of systems relatively easily and operate largely undetected.

DOD's weapons are more computerized and networked than ever before, so it's no surprise that there are more opportunities for attacks. Yet until relatively recently, DOD did not make weapon cybersecurity a priority. Over the past few years, DOD has taken steps towards improvement, like updating policies and increasing testing.

Federal information security—another term for cybersecurity—has been on our list of High Risk issues since 1997.

Today's weapon systems are heavily computerized, which opens more attack opportunities for adversaries (represented below in a fictitious weapon system for classification reasons). 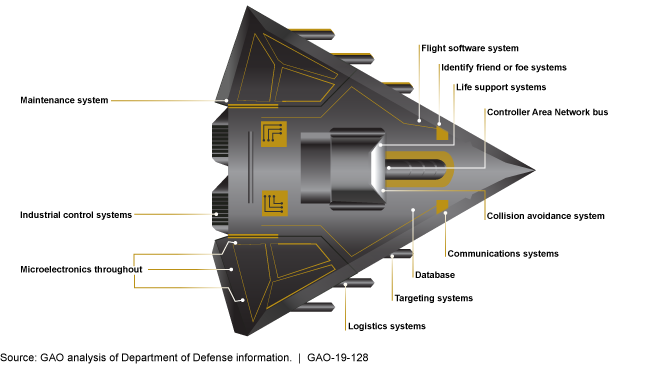 The Department of Defense (DOD) faces mounting challenges in protecting its weapon systems from increasingly sophisticated cyber threats. This state is due to the computerized nature of weapon systems; DOD's late start in prioritizing weapon systems cybersecurity; and DOD's nascent understanding of how to develop more secure weapon systems. DOD weapon systems are more software dependent and more networked than ever before (see figure).

In operational testing, DOD routinely found mission-critical cyber vulnerabilities in systems that were under development, yet program officials GAO met with believed their systems were secure and discounted some test results as unrealistic. Using relatively simple tools and techniques, testers were able to take control of systems and largely operate undetected, due in part to basic issues such as poor password management and unencrypted communications. In addition, vulnerabilities that DOD is aware of likely represent a fraction of total vulnerabilities due to testing limitations. For example, not all programs have been tested and tests do not reflect the full range of threats.

DOD plans to spend about $1.66 trillion to develop its current portfolio of major weapon systems. Potential adversaries have developed advanced cyber-espionage and cyber-attack capabilities that target DOD systems. Cybersecurity—the process of protecting information and information systems—can reduce the likelihood that attackers are able to access our systems and limit the damage if they do.

GAO is not making any recommendations at this time. GAO will continue to evaluate this issue.