A 2016 law allows a VA pilot program to accept donations for facility construction or improvements. In Omaha, Nebraska, one donor group—in consultation with the VA—is building an ambulatory care center. The VA and the donor group said this project is proceeding faster and at a lower cost than a typical VA project. However, VA officials said it is hard to find partners to make large donations.

We made 3 recommendations, including ways to make the program's steering committee more effective at finding partners. 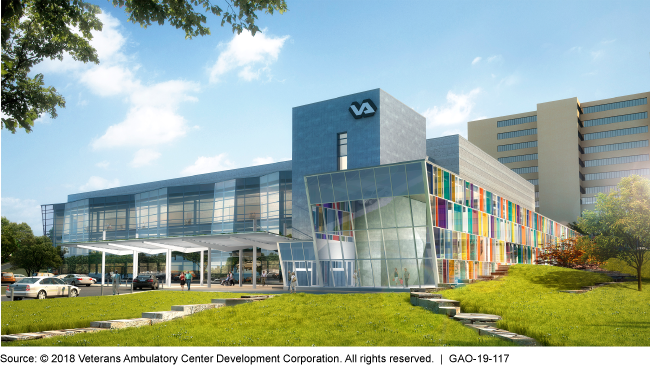 This image shows a rendering of the completed facility.

The Department of Veterans Affairs (VA) is conducting a pilot program, called CHIP-IN, that allows VA to partner with non-federal entities and accept real property donations from them as a way to help address VA's infrastructure needs. Although VA signed its first project agreement under the program in April 2017, VA has not yet established a framework for effective design of the pilot program. Specifically, VA's pilot program design is not aligned with four of five leading practices for designing a well-developed and documented pilot program. VA has begun to implement one leading practice by improving its efforts to communicate with relevant stakeholders, such as including external stakeholders in key meetings. However, the VA offices involved have not agreed upon and documented clear, measurable objectives for the pilot program, which is a leading practice. Further, VA has not developed an assessment methodology or an evaluation plan that would help inform decisions about whether or how the pilot approach could be expanded. While VA officials said they intend to develop these items as tasks for the newly formed CHIP-IN steering committee, they have no timeline for doing so. Without clear objectives and assessment and evaluation plans, VA and Congress may have difficulty determining whether the pilot approach is an effective way to help address VA's infrastructure needs.

To date, the CHIP-IN pilot suggests that donation partnerships could improve construction projects, but identifying donors and establishing a team for the pilot program have presented challenges. Officials from VA and the donor group for the first pilot project—an ambulatory care center in Omaha, Nebraska—said they are completing the project faster than if it had been a standard federal construction project, while achieving potential cost savings by using private sector practices. However, VA officials said it is challenging to find partners to make large donations with no financial return, and VA's lack of marketing and philanthropic development experience exacerbates that challenge. VA and the donor group agreed that a dedicated team of individuals with relevant expertise could facilitate the pilot's implementation. The new CHIP-IN steering committee could serve this purpose, but it lacks documented roles and responsibilities. Establishing a team with clear roles and responsibilities and identifying both available and needed staff resources could assist VA in partnering with additional donors and creating new opportunities to meet veterans' needs.

VA has pressing infrastructure needs. The Communities Helping Invest through Property and Improvements Needed for Veterans Act of 2016 (CHIP-IN Act) authorized VA to accept donated real property—such as buildings or facility construction or improvements—through a pilot program. VA has initiated one project in Omaha, Nebraska, through a partnership with a donor group. VA can accept up to five donations through the pilot program, which is authorized through 2021.

The CHIP-IN Act includes a provision for GAO to report on donation agreements. This report (1) examines the extent to which the VA's pilot design aligns with leading practices and (2) discusses what VA has learned from the pilot to date. GAO reviewed VA documents, including plans for the pilot program, and visited the Omaha pilot project. GAO interviewed VA officials, the Omaha donor group, and three non-federal entities that responded to VA's request seeking donors. GAO compared implementation of VA's pilot to leading practices for pilot design, organizational transformation, and cross-functional teams.