GAO found that the U.S. Coast Guard has a sound process for analyzing its boat stations that includes clear and specific steps for analyzing the need for stations using terms that can be readily defined and measured. In 2013, following this process, the Coast Guard and its contractor identified 18 unnecessarily duplicative boat stations with overlapping coverage that could be permanently closed without negatively affecting the Coast Guard's ability to meet its 2-hour search and rescue (SAR) response standard and other mission requirements. The process was designed to ensure the Coast Guard met or exceeded requirements to maintain SAR coverage and to account for such factors as boat downtime and surge capacity to respond to certain incidents. Further, the boat station analysis did not consider potential SAR responses by the Coast Guard's air stations and facilities, which can provide additional overlapping coverage. Coast Guard officials said that the closures would, among other things, help improve operations by consolidating boat station caseloads to help ensure personnel were active enough to maintain training requirements.

Overlap of Coast Guard Search and Rescue Coverage Provided by Boat Stations, Air Stations, and Air Facilities as of May 2017 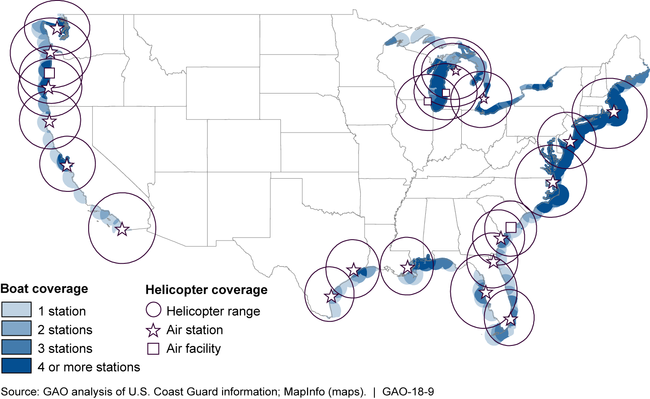 In 2017, the Coast Guard affirmed that its leadership believes the 2013 study remains valid, but so far the agency has not taken actions to implement the closures identified by its sound process. Instead, the Coast Guard is recommending conversion of some year-round stations to seasonal stations that would operate during the summer. Coast Guard officials stated that seasonal closures are preferable to no action, given its limited resources, the significant overlapping SAR coverage, and potential to improve operations. However, permanently closing unnecessarily duplicative stations may better position the Coast Guard to improve its operations. It could also achieve up to $290 million in cost savings over 20 years, if stations were permanently closed.

The Coast Guard, within the Department of Homeland Security (DHS), is charged with preventing loss of life, injury, and property damage in the maritime environment through its SAR mission. It maintains over 200 stations with various assets, such as boats and helicopters (depending on the station), along U.S. coasts and inland waterways to carry out this mission, as well as its other missions such as maritime security. Resource limitations and changes to operations require the Coast Guard to periodically reexamine the need for these stations. GAO was asked to review these efforts.

This report addresses, among other objectives, the extent to which the Coast Guard has (1) a sound process for analyzing the need for its boat stations and (2) taken actions to implement its boat station process results. GAO reviewed Coast Guard laws, standards, and guidance; analyzed Coast Guard data on station locations and SAR coverage; and analyzed the process and criteria used to evaluate its station needs and compared it with established evaluation design practices and internal control standards. GAO also interviewed Coast Guard officials.

In 2013, the Coast Guard identified 18 stations it could close and still meet its policy for rescues...
Blog Post

From Search and Rescue to Special Forces: The U.S. Coast Guard’s Many Missions