The Department of Defense (DOD) is sustaining over 250 F-35 aircraft (F-35) and plans to triple the fleet by the end of 2021, but is facing sustainment challenges that are affecting warfighter readiness (see table). These challenges are largely the result of sustainment plans that do not fully include key requirements or aligned (timely and sufficient) funding. DOD is taking steps to address some challenges, but without more comprehensive plans and aligned funding, DOD risks being unable to fully leverage the F-35's capabilities and sustain a rapidly expanding fleet.

Figure 1: Average Time for Depot-level Repair of an F-35 Part as Compared with the Objective

DOD's plan to enter into multi-year, performance-based F-35 sustainment contracts with the prime contractor has the potential to produce costs savings and other benefits, but DOD may not be well positioned to enter into such contracts by 2020. To date, DOD has not yet achieved its desired aircraft performance under pilot (i.e., trial) performance-based agreements with the prime contractor. In addition, the level of performance DOD has contracted for is generally below what the services desire (see figure 2 for Marine Corps example). Also, the three performance metrics DOD is using to incentivize the contractor under these pilot agreements may not be the appropriate metrics to achieve desired outcomes, in part because they are not fully reflective of processes for which the contractor has control. This can make it difficult for DOD to hold the contractor accountable. Further, due to system immaturity, DOD does not have full information on F-35 sustainment costs and technical characteristics such as reliability and maintainability, which could hinder its ability to effectively negotiate performance-based contracts with the contractor by 2020. Without examining whether it has the appropriate metrics to incentivize the contractor or a full understanding of the actual costs and technical characteristics of the aircraft before entering into multi-year, performance-based contracts, DOD risks overpaying the contractor for sustainment support that does not meet warfighter requirements. 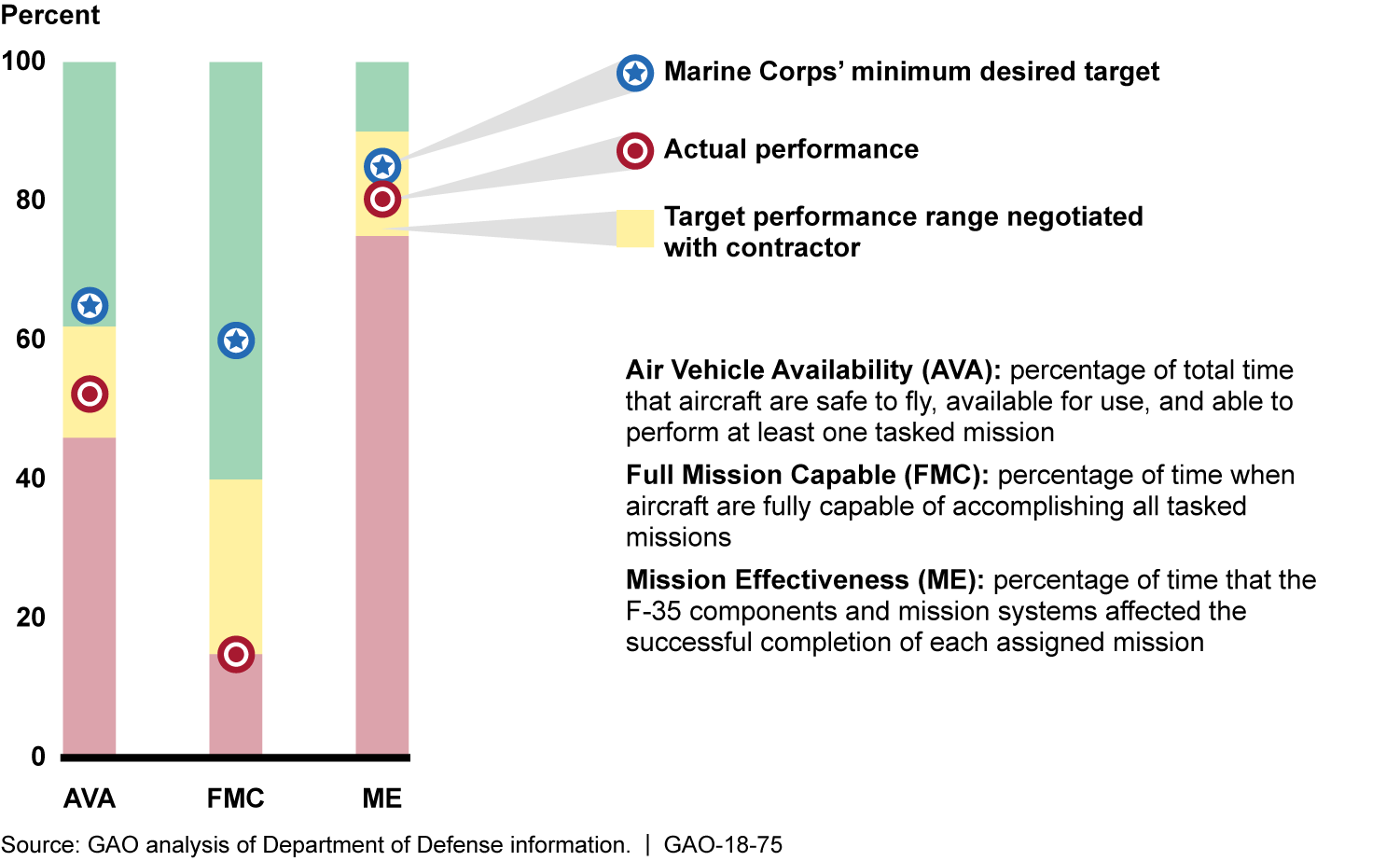 DOD has taken actions to reduce F-35 sustainment costs, but estimated life cycle costs have increased and are not fully transparent to the military services (see figure 3). Specifically, the services do not fully understand how the costs they are being charged by the program office are linked to the capabilities they are receiving, citing unexplained cost increases and difficulty in tracking their requirements to contracts. For example, the Marine Corps received an initial funding requirement for fiscal year 2017 sustainment of $293 million, which then increased to $364 million in the execution year. This lack of transparency is due in part to insufficient communication between the program office and the services, and it puts the services in a difficult position as they consider critical trade-offs that may make F-35 sustainment more affordable. Without improving communication with the services about the costs they are being charged, the services may not be able to effectively budget for long-term sustainment.

The F-35 aircraft represents the future of tactical aviation for the U.S. military, and is DOD's most expensive weapon system, with sustainment costs alone estimated at more than $1 trillion over a 60-year life cycle. As the F-35 program approaches full-rate production, DOD is working to deliver an affordable sustainment strategy that is able to meet the needs of the military services. This strategy is being tested as DOD stands up military depots, trains personnel, and supports its first operational squadrons—with plans to establish multi-year, performance-based contracts by 2020.

The National Defense Authorization Act for fiscal year 2017 includes a provision for GAO to review the F-35 program's sustainment support structure. This report assesses (1) the status of DOD's efforts to sustain the F-35 fleet and any challenges it has faced; (2) the extent to which DOD is positioned to enter into multi-year, performance-based F-35 sustainment contracts; and (3) the progress, if any, DOD has made toward reducing F-35 sustainment costs and the extent to which costs are transparent. GAO reviewed DOD and contractor documentation, analyzed data, and interviewed relevant officials.

GAO recommends that DOD revise sustainment plans, re-examine metrics and ensure that it has sufficient knowledge of costs and technical characteristics before entering into performance-based contracts, and improve communication with the services about sustainment costs. DOD concurred with these recommendations.