Americans rely on the Global Positioning System daily. DOD is working to modernize GPS and deliver a more secure signal to military users, an effort that has taken longer than planned and cost more than expected.

DOD faces risks as it simultaneously develops satellites, a ground system to operate them, and receiver cards that allow use of GPS signals. It will need to install receiver cards on hundreds of systems and, without better coordination, risks paying repeatedly to solve similar problems across the systems.

We recommended that DOD assign responsibility to an organization to collect test data, lessons learned, and design solutions. 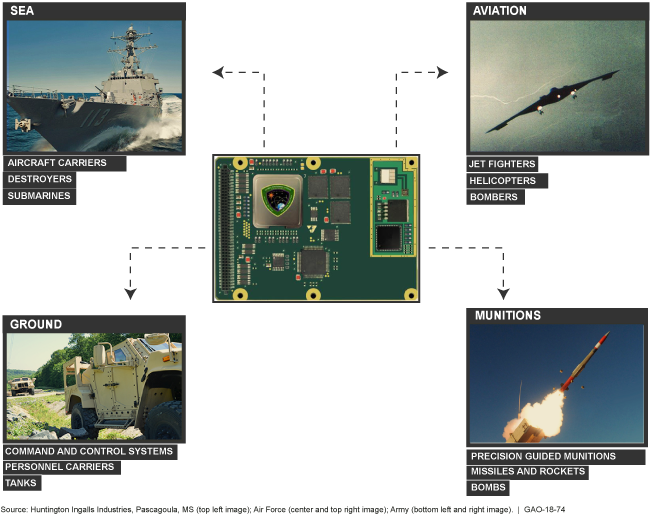 Photos of sea, aviation, ground, and munitions systems and an illustration of a receiver card.

The Department of Defense's (DOD) acquisition of the next generation Global Positioning System (GPS) satellites, known as GPS III, faces a number of acquisition challenges, but these challenges do not threaten DOD's ability to continue operating the current GPS system, which DOD refers to as the constellation, in the near term. Projections for how long the current constellation will be fully capable have increased by nearly 2 years to June 2021, affording some buffer to offset any additional satellite delays. While the first GPS III satellite has a known parts problem, six follow-on satellites—which do not—are currently scheduled to be launched by June 2021.

DOD is relying on a high-risk acquisition schedule to develop a new ground system, known as OCX, to control the broadcast of a modernized military GPS signal. OCX remains at risk for further delays and cost growth. To mitigate continuing delays to the new ground control system, the Air Force has begun a second new program—Military-code (M-code) Early Use—to deliver an interim, limited broadcast encrypted GPS signal for military use by modifying the current ground system. GAO will continue to monitor OCX progress.

DOD has made some progress on initial testing of the receiver cards needed to utilize the M-code signal. However, additional development is necessary to make M-code work with over 700 weapon systems that require it. DOD has begun initial planning for some weapon systems, but more remains to be done to understand the cost and schedule needed to transition to M-code receivers. The preliminary estimate for integrating and testing a fraction of the weapon systems that need the receiver cards is over $2.5 billion through fiscal year 2021 with only 28 fully and 72 partially funded (see figure). The cost will increase by billions when as yet unfunded weapon systems are included.

Status of Weapon Systems That Have Determined the Cost Needed to Transition to M-code Receivers through Fiscal Year 2021, as of February 2017

The level of development and procurement effort beyond the initial receiver cards is significant and will require close coordination across DOD. After the Air Force develops initial cards, the breadth and complexity of this acquisition will multiply, as the offices responsible for upgrading hundreds of weapon systems begin their own individual efforts to further develop and test the cards. However, DOD does not have an organization assigned to collect test data, lessons learned, and design solutions so that common design solutions are employed to avoid duplication of effort as multiple entities separately mature receiver cards. DOD therefore risks paying to repeatedly find design solutions to solve common problems because each program office is likely to undertake its own uncoordinated development effort.

GPS provides positioning, navigation, and timing data to civilian and military users who depend on this satellite-based system. Since 2000, DOD—led by the Air Force—has been working to modernize GPS and to keep the current system of satellites—known as the GPS constellation—operational, although these efforts have experienced cost and schedule growth.

The National Defense Authorization Act for Fiscal Year 2016 contained a provision that the Air Force provide reports to GAO on GPS acquisition programs and that GAO brief the congressional defense committees. GAO briefed the committees in 2016 and 2017. This report summarizes and expands on information presented in those briefings.

DOD should assign responsibility to an organization to collect test data, lessons learned, and design solutions so they may be shared. DOD concurred with the recommendation.