Forty railroads, including Amtrak, commuter, and freight railroads, are required to implement positive train control (PTC)—a communications-based system designed to slow or stop a train that is not being operated safely. Although the deadline for PTC implementation is December 31, 2018, railroads that meet certain criteria may receive a maximum 2-year extension.

We testified that, as of June 30, 2018, many railroads remain in the early stages of PTC implementation, such as equipment installation and early testing. Most railroads anticipate needing an extension.

[This text was updated for clarification.] 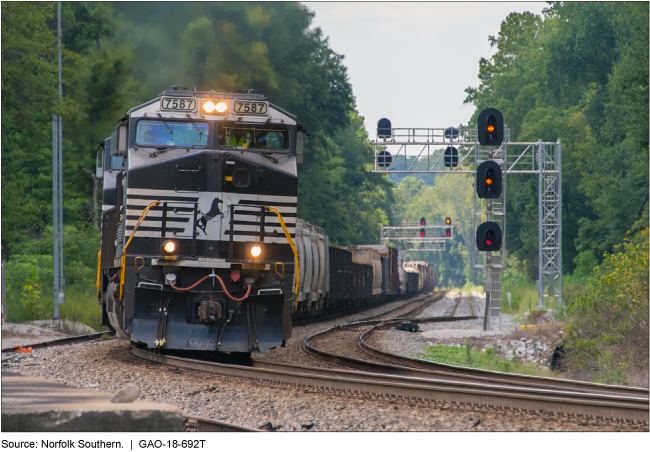 Photo of a train with signals

As of June 30, 2018, many railroads remained in the early stages of positive train control (PTC) implementation—including equipment installation and early field testing. About half of the 40 railroads implementing PTC reported that they are still installing equipment, though many are nearing completion. However, with the exception of the largest freight railroads—known as Class I—and Amtrak, most railroads reported less progress in later implementation stages, especially revenue service demonstration (RSD), an advanced form of field testing that is required to fully implement PTC. Of the 28 commuter railroads required to implement PTC, 19 reported initiating field testing, but only 8 reported initiating RSD. The Federal Railroad Administration (FRA) recently clarified the criteria railroads must meet to qualify for a 2-year extension past the December 31, 2018, PTC implementation deadline. To receive an extension, railroads must meet 6 statutory criteria. For the sixth criterion, commuter and smaller freight railroads are authorized to either initiate RSD on at least one track segment or use FRA-approved substitute criteria. FRA clarified these and other requirements at three PTC symposiums hosted for railroads in summer 2018. For example, FRA officials said that for railroads eligible to use substitute criteria, initiating field testing instead of RSD was one approach that could potentially receive FRA's approval. FRA's actions are consistent with GAO's March 2018 recommendation that the agency communicate to the railroads the requirements and process for an extension.

Most railroads anticipate needing an extension, leaving substantial work for both railroads and FRA to complete before the end of 2020. Thirty-two of 40 railroads reported to GAO that they, or the railroad which owns the track on which they operate, will apply for an extension. Sixteen commuter and smaller freight railroads reported planning to apply for an extension using substitute criteria, and of these, 12 intend to apply for substitute criteria based on early testing such as field testing. Though substitute criteria are authorized in law, this approach defers time-intensive RSD testing into 2019 and beyond. In addition, railroads expressed concerns with the time and effort involved with interoperability testing—a key remaining hurdle for railroads such as Class I railroads that are further along with implementation. Further, railroads expressed concern that FRA's workload will markedly increase as railroads submit requests for extension approvals. FRA has acknowledged concerns about the pending surge of submissions and has taken recent steps to help manage the forthcoming influx of documentation, such as reallocating resources. Nonetheless, given that as of early September 2018, only 1 railroad—a Class I railroad—had applied for an extension, it remains unclear how many extension requests FRA will receive or what FRA's enforcement strategy will be for noncompliance with the statute, such as for railroads that fail to apply for an extension by the deadline. In addition, challenges related to PTC implementation and FRA's resources raise questions as to the extent FRA and the railroad industry are poised for full PTC implementation by December 31, 2020.

Forty railroads including Amtrak, commuter, and freight railroads are currently required by statute to implement PTC, a communications-based system designed to slow or stop a train that is not being operated safely. PTC must be interoperable, meaning trains can operate seamlessly on the same PTC-equipped track, including “tenants” that operate on track owned by another “host” railroad. Although the deadline for PTC implementation is December 31, 2018, railroads may receive a maximum 2-year extension to December 31, 2020, if they meet certain statutory criteria.

GAO was asked to review railroads' PTC implementation progress. This statement discusses (1) railroads' implementation progress and FRA's steps to assist them and (2) how railroads and FRA plan to approach the 2018 and 2020 deadlines. GAO analyzed railroads' most recent quarterly reports covering activities through June 30, 2018; sent a brief questionnaire to all 40 railroads; and interviewed officials from FRA and 16 railroads, selected in part based on those identified as at-risk by FRA.

In March 2018, GAO recommended FRA take steps to systematically communicate extension information to railroads and to use a risk-based approach to prioritize agency resources and workload. FRA has taken some steps to address these recommendations, such as recently communicating and clarifying extension requirements to all railroads during three symposiums, and GAO will continue to monitor FRA's progress.