Responding to two 1998 terrorist bombings of U.S. embassies, the State Department embarked on a program to construct more secure embassies. While it had completed 77 as of September 2017, State won't reach its goal of 180 new embassies by 2018.

Unexpected requirements—such as adding office annexes—and not accounting for inflation have contributed to slowing project delivery. With over 20 embassies under construction and 72 planned, State faces staffing shortages and strained contractor relationships.

We made recommendations to State to plan for inflation, analyze funding and workforce needs, and seek improved contractor relationships. 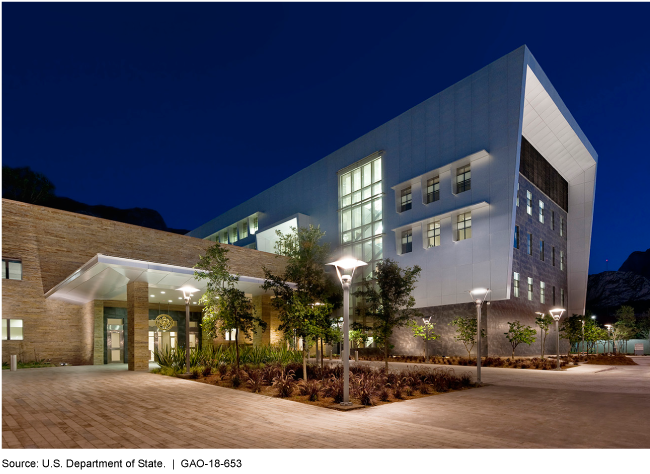 Picture of a modern building with a brick entryway at night with lights and plantings.

The Department of State's (State) Bureau of Overseas Buildings Operations (OBO) has constructed new embassies at a slower pace than forecast due in part to unexpected building requirements and inflation. In 1999 State identified a need to replace 180 embassies. In 2005, with about 30 projects underway, State planned to replace the other 150 embassies by 2018. Since 1999, OBO has built 77 embassies under its Capital Security Construction Program (CSCP), at a total cost of about $24 billion as of fiscal year 2017. CSCP's pace has been affected by unexpected additional building requirements, such as office annexes and Marine quarters. Also, CSCP received only one program funding adjustment for inflation since 1999, and State does not intend to seek annual adjustments. Currently, OBO does not provide information on inflationary effects on CSCP or an estimated total capital investment or feasible time frames for the nearly 50 embassies identified for replacement beyond 2022. Lack of such information may affect stakeholders' ability to make informed budget decisions.

Note: While State forecast an intention to build 180 new embassies in 1999, it subsequently decided to take a different approach for about 10 posts by keeping some existing embassies and upgrading them.

While cost growth occurred on a majority of completed embassy projects and durations averaged about 36 months, these were generally within budgeting and planning allowances. GAO could not assess performance of Excellence projects because none had been completed as of the end of fiscal year 2017.

Staffing workload and contractor collaboration have affected OBO's project delivery. Without an OBO-wide workforce analysis, it is unclear whether OBO's staffing is commensurate with its workload needs. OBO maintains that its office overseeing project design reviews is understaffed, adversely affecting some of its critical functions. Contractors also expressed concerns about the quality of design reviews, which may be affected by a staffing shortage and the use of temporary contractors. Also, OBO and contractor officials acknowledged weaknesses in collaboration, particularly with regard to contractors less experienced with embassy construction. Of the five contractors GAO spoke with, three said they are unlikely to pursue future projects because of issues working with OBO. Formal construction partnering—an industry best practice—between OBO and its contractors could help avoid adversarial relationships that inhibit swift resolution of issues. OBO's two long-standing contractors that have completed most of the CSCP embassy projects participated in early projects OBO identified as having used formal partnering.

In 1998, terrorists bombed two U.S. embassies in East Africa, killing over 220 people and injuring more than 4,000 others. In 1999, State launched the CSCP with the primary goal of providing secure, safe, and functional workplaces, and OBO adopted a streamlined, standard design for all new embassies. In 2011, OBO shifted to the Excellence approach for new embassies, where greater use of custom designs is intended to improve embassies' functionality, quality, operating costs, and appearance.

GAO was asked to review the performance of the CSCP. This report examines (1) the pace of the CSCP in constructing new embassies, (2) the cost and schedule performance of OBO's recent embassy construction projects, and (3) key factors that have affected State's ability to deliver construction projects efficiently. GAO analyzed information from State planning, funding, and reporting documents and interviewed State and contractor officials. As part of an assessment of nine construction case-study projects, selected for cost or schedule increases, GAO conducted four site visits to embassies under construction.

GAO recommends that State (1) provide information on the estimated effects of inflation on planned projects, (2) provide an analysis of estimated total costs and time frames to complete the CSCP, (3) conduct an OBO-wide workforce analysis, and (4) pilot formal construction partnering. State concurred with our recommendations and also conveyed it is now pursuing other initiatives beyond Excellence.