Project costs we looked at varied widely (shown below), and federal oversight of costs is limited. Federal and state agencies could use data on variables that affect cost—such as square footage and building type—to better monitor the tax credit. State agencies that administer the credit aren't required to report the kind of detailed cost data that could reduce fraud risks.

We recommended ways to make better data available to the government and improve oversight of the credit. 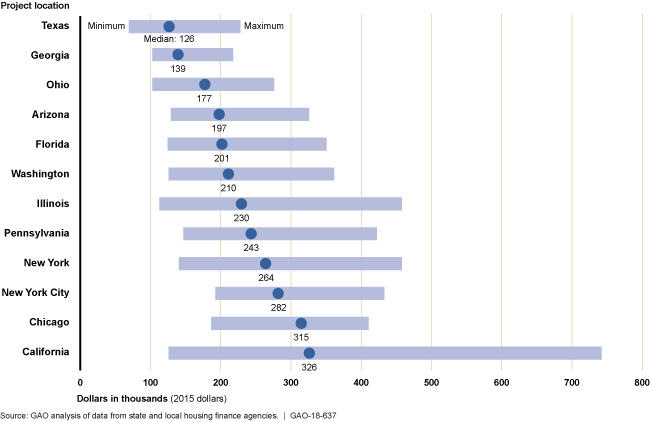 GAO identified wide variation in development costs and several cost drivers for Low-Income Housing Tax Credit (LIHTC) projects completed in 2011–2015. Across 12 selected allocating agencies, median per-unit costs for new construction projects ranged from about $126,000 (Texas) to about $326,000 (California). Within individual allocating agencies, the variation in per-unit cost between the least and most expensive project ranged from as little as $104,000 per unit (Georgia) to as much as $606,000 per unit (California). After controlling for other characteristics, GAO estimates that

larger projects (more than 100 units) cost about $85,000 less per unit than smaller projects (fewer than 37 units), consistent with economies of scale.

projects for senior tenants—nearly one-third of all projects—cost about $7,000 less per unit than those for other tenants, potentially due to smaller unit sizes.

Weaknesses in data quality and federal oversight constrain assessment of LIHTC development costs and the efficiency and effectiveness of the program. GAO found

inconsistencies in the types, definitions, and formats of cost-related variables 12 selected agencies collected.

allocating agencies did not capture the full extent of a key indirect cost—a fee paid to syndicators acting as intermediaries between project developers and investors that IRS requires be collected.

IRS does not require allocating agencies to collect and report cost-related data that would facilitate programwide assessment of development costs. Further, Congress has not designated any federal entity to maintain and analyze LIHTC cost data.

Even without a designated federal entity, opportunities exist to advance oversight of development costs. In particular, greater standardization of cost data would lay a foundation for allocating agencies to enhance evaluation of cost drivers and cost-management practices.

LIHTCs encourage private investment in low-income rental housing and have financed about 50,000 housing units annually since 2010.The LIHTC program is administered by IRS and credit allocating agencies (state or local housing finance agencies). The program has come under increased scrutiny following reports of high or fraudulent development costs for certain LIHTC projects. GAO was asked to review the cost-efficiency and effectiveness of the LIHTC program.

This report examines (1) development costs for selected LIHTC projects and factors affecting costs, (2) allocating agencies' oversight of costs, and (3) factors limiting assessment of costs. GAO compiled and analyzed a database of costs and characteristics for 1,849 projects completed in 2011–2015 (the most recent data available when compiled) from 12 allocating agencies. The agencies span five regions and accounted for about half of the LIHTCs available for award in 2015. GAO also reviewed the most recent allocating plans and related documents for 57 allocating agencies and reviewed federal requirements.