In October 2017, the Census Bureau announced that the projected life-cycle cost of the 2020 Census had climbed to $15.6 billion, a 27-percent increase from its 2015 estimate.

Increases to the 2020 Census Costs

Bar graph showing that the cost estimate for the Census increased by $3.3 billion between 2015 and 2017.

Extent to Which Census Bureau Cost Estimate for 2020 Census Meets Standards for Reliability, 2015 vs. 2017 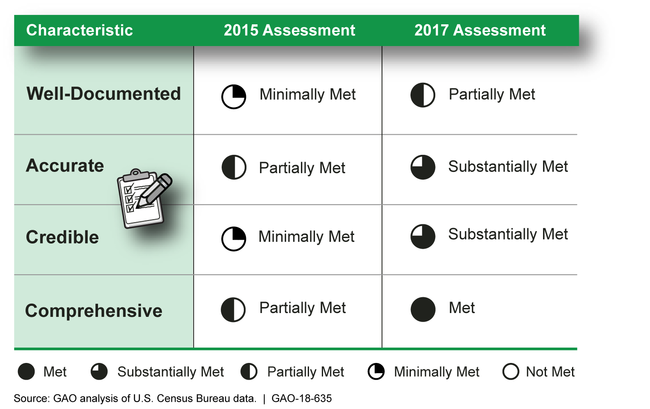 A reliable cost estimate serves as a tool for program development and oversight, helping management make informed decisions. During this review, GAO found the Bureau used the cost estimate to inform decision making.

Factors that contributed to cost fluctuations between the 2015 and 2017 cost estimates include:

Changes in assumptions. Among other changes, a decrease in the assumed rate for self-response from 63.5 percent in 2015 to 60.5 percent in 2017 increased the cost of collecting responses from nonresponding housing units.

Improved ability to anticipate and quantify risk. In general, contingency allocations designed to address the effects of potential risks increased overall from $1.3 billion in 2015 to $2.6 billion in 2017.

An overall increase in information technology (IT) costs. IT cost increases, totaling $1.59 billion, represented almost 50 percent of the total cost increase from 2015 to 2017.

In October 2017, the Department of Commerce (Commerce) announced that the projected life-cycle cost of the 2020 Census had climbed to $15.6 billion, a more than $3 billion (27 percent) increase over its 2015 estimate. A high-quality, reliable cost estimate is a key tool for budgeting, planning, and managing the 2020 Census. Without this capability, the Bureau is at risk of experiencing program cost overruns, missed deadlines, and performance shortfalls.