In 2007, a congressional advisory panel identified a number of ways the government could buy goods and services more effectively and save money in the process. While Congress and the executive branch did a lot to address the panel’s recommendations, we found that some challenges endure over a decade later.

The use of competitive contracts to buy things, a practice that should lower prices, declined at the Defense Department. Across all of government, however, use remained about the same

Despite improvements in the acquisition workforce, finding workers with the technical knowledge for complex IT purchases is still difficult 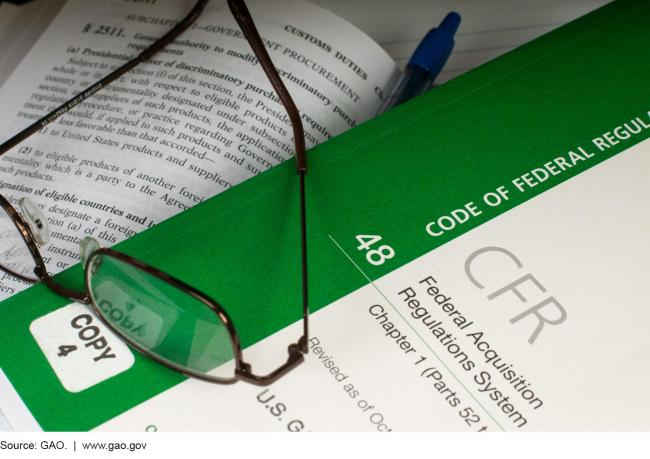 This is a photo of the cover of chapter 1 of the Code of the Federal Acquisition Regulation.

Congress and the executive branch have taken numerous actions to address key issues the Acquisition Advisory Panel (Panel) identified in its 2007 report, but these actions have not eliminated some enduring challenges. The figure below presents the key issues the Panel addressed in relation to the life cycle of a typical contract as identified by GAO.

Three of the key issues, and the corresponding challenges, align with specific phases in the contracting life cycle:

GAO has also found that agencies are sometimes using bridge contracts—which GAO has generally defined as either extensions to existing contracts or new short-term, sole-source contracts—to avoid a lapse in service caused by delay of a follow-on contract award. In some instances, bridge contract awards delay opportunities for competition and can place the government at risk of paying higher prices for multiple years. The figure below depicts how an Army bridge contract for computer support services planned for 12 months was extended to 42 months.

Further, GAO's work shows that agencies have not fully embraced initiatives and techniques intended to reduce the prices they pay, including consolidated purchasing approaches and robust market research.

Three of the key issues, and the corresponding challenges, cut across all the phases of the contracting life cycle:

Amid this large spending, the federal government has taken steps to reform federal acquisitions, increase efficiencies, and improve results. For example, in the Services Acquisition Reform Act of 2003, Congress established the Acquisition Advisory Panel to review federal acquisition laws, regulations, and policies; and identify opportunities for improvement. The Panel issued its final report in 2007, addressing topics that span all three phases of the contracting life cycle identified by GAO: pre-contract award, contract award, and post-contract award.

GAO was asked to follow up on the Panel's report and identify progress made since 2007. This report identifies the actions the federal government has taken to address key issues raised in the Panel's report, and the challenges that remain. GAO reviewed documentation and interviewed personnel from federal agencies and the private sector. These personnel included staff from OMB that are responsible for federal procurement policy, as well as staff supporting a panel addressing DOD's acquisition regulations and processes, known as the Section 809 Panel. GAO also leveraged its large body of work on federal acquisitions.

GAO continues to believe the agencies should implement all of these recommendations.