U.S. Customs and Border Protection (CBP) evaluated barrier design prototypes for the southwest border. CBP also determined how it would prioritize locations for future barriers, but didn't analyze the costs of putting barriers in each potential location. These costs can vary depending on topography, land ownership, and other factors.

Without assessing costs, CBP doesn't have complete information for prioritizing barrier deployments in the most cost-effective manner.

We recommended, among other things, further analysis of the costs to build future barriers. 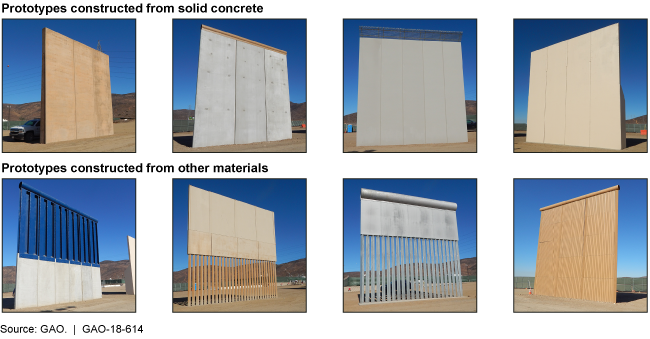 Eight pictures of barrier prototypes near the southwest border. Some are concrete; some are constructed of other materials.

In March 2017, U.S. Customs and Border Protection (CBP), within the Department of Homeland Security (DHS), issued two requests for proposals (RFP) for physical barrier prototype designs for the southwest border. One RFP was for prototypes made of reinforced concrete, the other was for prototypes made of other materials. CBP subsequently issued task orders, under contracts awarded to six companies, to design and construct eight prototypes, pictured below. From October to December 2017, CBP tested the prototypes, using a range of methods to attempt to climb and breach them. Based on the results, CBP identified design attributes it can use to customize future barrier designs for specific locations, depending on the terrain and other factors. 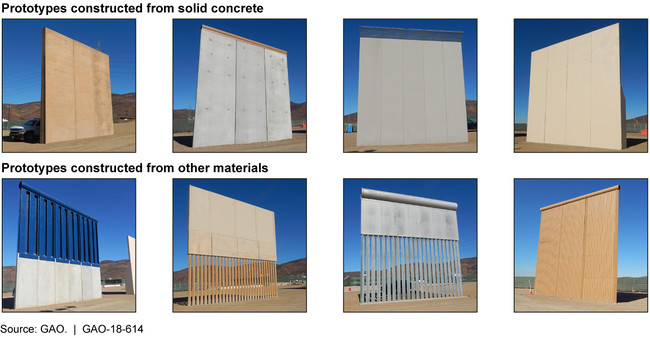 CBP and U.S. Border Patrol developed a methodology for prioritizing future barrier deployments along the entire southwest border, which included input from Border Patrol officials, data on illegal entry traffic, and analysis of operational and engineering feasibility for each potential location. However, the strategy did not include analysis of the costs associated with deploying barriers in each location or segment, which can vary depending on topography, land ownership, and other factors. Without assessing costs, consistent with leading practices for capital decision making, CBP does not have complete information for prioritizing locations to use its resources in the most cost-effective manner.

Acquisitions for the Border Wall System Program—DHS's program to deploy barriers and other assets along the southwest border—are required to follow the department's acquisition process. However, GAO found that for one of the two approved segments, DHS has not documented its plans as required. Specifically, GAO found that for the Rio Grande Valley segment, DHS leadership approved and documented plans in December 2017. In contrast, for the San Diego secondary barrier segment, CBP's plans have not yet been documented, which could hinder DHS's ability to monitor progress for the segment.

In January 2017, the President issued Executive Order 13767, which directs the Secretary of Homeland Security to immediately plan, design, and construct a wall or other physical barriers along the southwest border. CBP's fiscal year 2018 appropriation provided funding for barrier planning and design, but limited use of funds for primary barrier construction to previously deployed fencing designs.

GAO was asked to review DHS's efforts to deploy barriers along the southwest border. This report examines (1) how CBP evaluated potential designs for barriers, (2) DHS's process for identifying and assessing locations for future deployments of barriers, and (3) how DHS is managing the acquisition of the Border Wall System Program, among other things.

GAO analyzed planning documents; interviewed DHS, CBP, and Border Patrol officials; and conducted a site visit to San Diego to observe CBP's testing of barrier prototypes. This is a public version of a sensitive report that GAO issued in June 2018. Information that DHS deemed sensitive has been omitted.

GAO recommends that DHS analyze the costs associated with future barrier segments and include that analysis in future planning, and document plans for the planned secondary barrier replacement in the San Diego sector. DHS concurred with GAO's recommendations.